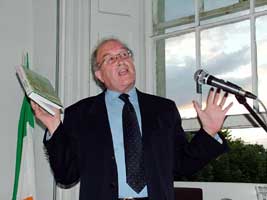 Anthony Coughlan delivered a paper on the proposed EU Constitution

Europe, and the proposed European Constitution were the central themes of the final day of the 16th Desmond Greaves Summer School in the Labour History Museum last weekend.

The audiences at the previous two days of debate had heard presentations from Anthony Coughlan on the proposed Constitution, and from trade union leader Mick O'Reilly and Queens Sociology lecturer Alan Harper on the somewhat dubious loyalties of Irish capitalism.

Roger Cole of the Peace and Neutrality Alliance (PANA) opened the school on Sunday morning with a thoughtful presentation on the question of coalition as a way forward for progressive politics. He drew a link between the continuing expansion of US imperialism, an expansion he suggested would soon become economically unviable, and the need for progressives to coalesce in opposition on an international basis.

Turning to Ireland, he argued that "Fianna Fáil is the first Irish political party since Redmond to actively support a foreign, imperialist war of aggression.

"In effect, Fianna Fáil has become the party of war capitalism in Ireland and Bertie Ahern is the new Redmond." Cole, a member of the General Council of the Labour party, admitted that "the European elections have seen Sinn Féin decisively replace the Labour Party as the third largest and leading left wing party in Ireland".

He concluded by calling for those progressive parties who had opposed the war on Iraq to come together to provide an alternative to the politics of Fianna Fáil and Fine Gael. He suggested hopefully that the war on Iraq might yet push Labour to the left, and away from its current commitment to the expansion of the EU as a counterweight to the United States.

Sinn Féin TD and Spokesperson on Foreign Affairs, Aengus Ó Snodaigh chaired the concluding seminar, a forum on 'Power Politics and the EU'. Andy Storey of the School of Development Studies, UCD and Afri, questioned the abiding social democrat myth of the EU as a benign force for good, pointing to its aggressive pursuit of neo-liberal trade policies abroad, undermining developing and impoverished nations.

The consistent attacks on public service provision, and what the World Development Movement terms a policy of targeting weaker nations were likely to accelerate, he suggested. "The new EU Commission appointments, with incoming President José Barroso, Charlie McCreevy and Peter Mandelson, represent an institutionalisation and consolidation of the right wing shift of recent years," said Storey.

He went on to examine the implications of the European agenda for neutrality. He pointed to the new rapid reaction force of nine battle groups suggested by France and Britain, which could be deployed in 'failed or failing states' as an ominous development in the expansion of the EU military agenda, along with the rewriting of the Petersburg Tasks to include joint disarmament operations and provide military advice and assistance to third parties facing 'terrorism' threats.

Wicklow Green Party Councillor Deirdre de Búrca delivered the final paper of the weekend on the subject of democracy within the EU. Her presentation, which attracted a good deal of comment, argued that the EU's democratic deficit, accepted to exist even by its most fervent supporters, is "a purpose of the European Union's project, not a side effect". The participation by governments in international cross-border policy making, often behind closed doors, frees them from domestic checks and balances.

The very complexity and lack of transparency in such negotiations thus works to the advantage of government negotiators, who can negotiate more 'efficiently' without proper monitoring and accountability. In effect, de Búrca is suggesting collusion between the member states against the interests of their own people in order to further the project of economic and political integration.

Considering the refusal by the EU to accept the decision of the Irish people in the Nice referendum and its often voiced opposition to ratification of the proposed Constitution by referendum, the suggestion that the EU is fundamentally opposed to the notion of democracy, when it is not in its own interest, is neither as outlandish, nor as extreme, as it might seem at first glance.

While the 16th Greaves Summer School continued its deserved reputation for thoughtful and incisive commentary, the school itself could do with some reform to broaden out its reach and ensure a greater, and more disparate attendance. Copies of the papers presented will appear on the website of the Irish Democrat.