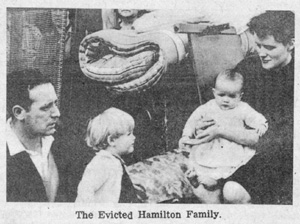 Mrs Ellen McDonnell, a widow with three teenage children, had been on the housing waiting list in Derry a mere 18 years at the time when the orders came to evict her from her home at 17 Harvey Street. She refused to move until granted a house by the Corporation or the Housing Trust, but of course that wasn't forthcoming. The night before the eviction the Young Republican Association (a legal front for the still banned Sinn Féin) moved into the house, barricading the door and saying they would remain to defend the house against the bailiffs. 'We are giving Mrs Mc Donnell moral support,' announced a spokesperson. 'The bailiffs are not getting into this house... we'll sit tight until we see if something can be done about it.'

And done something was. After several hours of vigil from the remaining open upstairs window, waiting for the eviction party to arrive and with pickets parading outside on the street, Mrs Mc Donnell received word from 'official sources' that the eviction was to be postponed until alternative accommodation could be found. It was the first ever successful resistance to an eviction in Derry and marked a route for the coming years.

Not so fortunate, however, were the Hamilton family. The Young Republican Association was also active on behalf of the Hamiltons but with less success. Their eviction took place from their home in Creggan Heights a fortnight earlier as the Corporation Housing Committee said that the rehousing of the family was no concern of theirs. With nowhere else to live, the adults moved in with relatives and the children were being 'looked after by a charitable organisation'.

When we think of the word eviction, I suppose many of us conjure up images of Captain Boycott, RIC men dressed in pointed constables hats, Ireland in the 1860s and the thatch roof being set alight with the cursed English spleen. This week, however, the photographs come from a century later, and not from rural Mayo but from Derry City, in October 1966, just two years before the Civil Rights campaign received its bruising initiation in Duke Street.