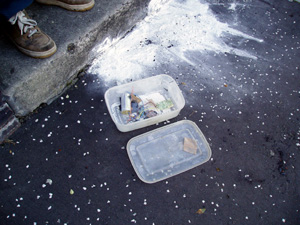 The hoax device left outside the home of Derry MLA Mary Nelis, which was dealt with by republicans

A Catholic family in Antrim escaped injury when their home was targeted by unionist paramilitaries. The couple and their 16-year-old son were asleep upstairs when a pipe bomb was placed outside their front door. It was shortly before 4am in the early hours of Monday morning when the device exploded, leaving the door and letterbox damaged and filling the house with smoke.

Paddy Murray, a former prisoner released under the terms of the Good Friday Agreement, said he had been afraid that his home might be targeted during the heightened tensions of the Orange marching season. His two youngest children, daughters aged seven months and two years, were staying with relatives at the time of the attack.

"When I expect trouble I move the babies out of the house," said Paddy, who is also Chairperson of the Rathenraw Community Association. The Murray house has been targeted before and their windows have been broken but this is the first bomb attack. "I've received a number of death threats before and windows have been broken but this latest attack is the most sinister.

"I'm not leaving Antrim. I intend to stay. This was the work of loyalists. The last threat I received came from the UVF so I suspect this has something to do with them."

o A pipe bomb discovered outside a house in County Down had been left just yards from a children's playground. The device was found by a postman on the doorstep of a flat in Downpatrick's New Model Farm estate at around 11am on Tuesday. The postman said the device looked as if it had been ignited but failed to explode. No one was in the flat at the time. The postman alerted families nearby immediately.

Sinn Féin Councillor Eamon McConvery said it was "a random sectarian attack in a quiet area".

o A hoax device discovered outside the home of Derry Sinn Féin MLA Mary Nelis was dealt with by local republicans after ensuring that neighbours were informed and children were safe in a local park. It was one of three such devices planted across the city on Sunday night. SDLP Assembly member Pat Ramsey was also targeted.

At around 5.30pm on Sunday a member of Mary's coming to visit informed her that there was a suspicious object at her front doorstep. When dismantled it was discovered the device — in a plastic container — consisted of a circuit board, battery, wiring and a quantity of talcum powder.

"To those small minded people who think that this type of action will intimidate either myself or my party, I tell them very emphatically that we have been attacked by far more powerful forces than them and it did not deflect us from our course and we will not be deflected now."

o Meanwhile, a Belfast man who was shot three times and seriously injured by unionist paramilitary gunmen two years ago has described the compensation offer of less than £500 as an insult.

Jason O'Halloran (31) was shot three times by an armed UDA ganging in a drive-by shooting on the corner of Rosapenna Street and the Oldpark Road on 21 July 2002. Jason was shot in both legs and groin and ten more shots were fired at him as he lay on the ground.

The attack took place shortly before the UDA killing of Catholic teenager Gerard Lawlor on the Whitewell Road. In 1972, the victim's mother was shot dead by unionist paramilitaries in a sectarian attack on the Oldpark Road. His father was seriously injured in another unionist paramilitary attack in 1974.

O'Halloran has described the Compensation Agency's offer of £487 as outrageous. "I cannot believe they are telling me that my life is worth less than £500," said James.

"I was told that it was a miracle that none of my vital organs were ruptured. I could have been killed that night. Do these people think you are shot and a couple of days later you can forget about it? I am still waking up with flashbacks." A solicitor for O'Halloran's will be appealing the decision.

o In Limavady, residents of the Edenmore Road have expressed concern after unionist paramilitary flags were erected outside their homes. A resident said that flags had been erected every year despite local opposition.

The local council recently agreed that flags should not be erected on public property and asked statutory agencies to remove them. However, unionist paramilitary intimidation of council staff has resulted in a reluctance to carry out their statutory obligations.