An Ireland of equals in a Europe of equals 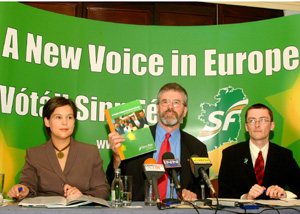 Sinn Féin President Gerry Adams MP on Tuesday morning launched the party's manifesto for the EU election and called on people to support Sinn Féin's agenda for change in Ireland and in Europe. The manifesto addresses fundamental issues relating to the future of the EU and sets out Sinn Féin's policies for an Ireland of equals in a Europe of equals.

"This election will help to determine the future of the EU, and therefore Ireland's future, for many years to come," said Gerry Adams.

Sinn Féin's EU manifesto, An Ireland of Equals in a Europe of Equals, is a comprehensive manifesto that deals with four key areas:

• The future direction of the European Union;

• An end to the militarisation of the EU and the role of the EU in the search for global justice.

"Sinn Féin stands for change in the EU," said the party president. "We have a vision for an EU that respects the democratic rights of the people of each member state. We want an EU that promotes equality among people and nations — an EU that works for the just and peaceful resolution of conflicts in Europe and beyond. We believe that the enlarged EU must adopt a new set of priorities including the elimination of poverty within its borders and the reform and strengthening of the United Nations to advance justice and peace in the wider world. The changes we want to see happen at EU level are no different from those we are pursuing here in Ireland.

"We also want the EU to become a partnership of equal states. We oppose current attempts to turn the EU into a superstate or a military and economic superpower because we value Irish sovereignty and Irish neutrality. We know that the EU reflects the political agenda of the big States, the unelected Eurocracy, and big business. But it can be changed, and it should be changed."

In keeping with the party's agenda for change, Sinn Féin's priority is to:

• Work for a reformed EU that gives power back to the people;

• Advance all-Ireland approaches to economic and social issues with the active assistance of the EU;

• Seek new priorities for EU policy, including the elimination of poverty and support for public services;

• Ensure that all EU law and policy respects and promotes equality and human rights;

• Ensure the Irish language is recognised as an official and working language in the EU; and

• Build political alliances with like-minded parties and civil society in Ireland and across the EU to advance these goals.

Call a halt to militarisation

"Successive EU treaties since the Single European Act in 1987 have corroded independent foreign policy to the point where Irish military neutrality is virtually all we have left.

"But Irish neutrality is now under pressure from the accelerating militarisation of the EU, underway in earnest since the first reference to EU military cooperation and Common Defence appeared in the Maastricht Treaty. Subsequent treaties have built incrementally on this. Despite all the denials, an EU Army is evolving, and the Constitutional Treaty under negotiation will bring us measurably closer to this.

"The need for intervention to halt the momentum of EU militarisation has never been more urgent. Yet the Irish Government, on behalf of a supposedly neutral state, has done nothing to oppose these developments, and has done even less to improve its negotiating position for the future in an EU that continues to be even more heavily dominated by NATO states after enlargement.

"Worse, the Irish Government has continued to violate its own stated policy of neutrality by allowing Shannon airport to be used as a refuelling base by thousands of US troops on their way to the illegal occupation of Iraq.

Flaws in draft EU Constitution must be addressed

Speaking at the launch of the party's EU manifesto, Sinn Féin EU candidate for the South, David Cullinane, called on the 26-County Government to address the fundamental flaws in the draft EU Constitution in the upcoming talks. He said Dublin should not be party to the creation of an EU superstate that will have a negative impact on Ireland and Europe for generations to come.

"Sinn Féin wants to build a Europe of equals, a true partnership of equal sovereign states, co-operating on social and economic development in Europe and beyond. This vision has little in common with the EU that Ireland is a member of today. Every EU Treaty since 1973 has transferred power from the Irish people to a political elite in Europe. This has reduced our economic and political sovereignty and undermined our neutrality by increments. Shortly after the election, the EU heads of state will again attempt to agree a new treaty establishing for the first time an EU Constitution.

"Sinn Féin is opposed to the creation of an EU superstate and the proposed draft EU Constitution moves the EU further down this federalist road.

"It makes fundamental changes in the structures of the EU and gives those structures more powers. It shifts the balance of power yet further from sovereign national parliaments and towards the EU, taking the single biggest step so far in the creation of an EU superstate. It entrenches the inequality of the EU by enhancing the power of the larger states. It also advances the project to turn the EU into a superpower."

Sinn Féin is calling for:

• An explicit recognition of EU member states' right to national sovereignty and self government;

• The primacy of fair trade and the social economy over free trade;

• An explicit recognition of Irish neutrality and parity of esteem for EU neutral states;

• An end to the practice of the EU Council meeting in camera;

• An end to weighted voting and a reintroduction of equality in decision-making between EU partners.

"We will also push for the domestic changes necessary to redress the democratic deficit here at home," said Cullinane.