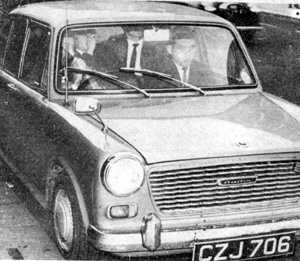 Joe McDonnell, who died on Hunger Strike, used to have a tale about going to a house in Andersonstown in West Belfast after the '72 Truce broke down and asking the householder if it would be possible to dump some weapons there.

'Well it would,' he was told, 'but nobody has ever come back for the last stuff ye left here.' Immediately interested, Joe and his comrades carefully broke open a hidden panel in a wall as shown by the pensioner and discovered a treasure trove of weapons dumped and probably long forgotten after the '50s campaign.

I felt a bit like that this week when out on the campaign trail in East Galway. A pensioner beckoned me into his house saying 'I have a few things here that might interest you'. He started poking about on a barely visible ledge above a staircase and produced a bundle yellowed with age. The son, sitting in a corner, solemnly told me that nobody had been 'near that stuff' for years.

It's the pike under the thatch, I thought to myself but no guns, no pikes, faraor (alas). Instead, he produced a huge number of copies of the United Irishman, stretching right back to 1953 and finishing up at the end of the '60s.

These were pre-Sticky UI's, pre-Split, pre-'50s campaign and a veritable treasure trove of long forgotten names and faces, lists and issues. Eat your Hartley out, Tom.

I'm dipping in now as I sit here and it's like a trip into Republican History. There are lists of prisoners in Belfast Prison (Crumlin Road) in the 1960s. Photographs of prisoners in jail in England in the 1950s. Lists and candidates from elections long since faded from memory. Street scenes of now demolished, rebuilt, and probably once again demolished Dublin, Derry and Belfast. It deserves, I think, to be given another turn from time to time so I want to begin this week with this wonderful photo from Nollaig 1967.

No, it's not an ad for a vintage rally or car for sale. Is it an Austin Mini, or is it an 1100, I hear the aul' timers ask. Dunno for sure, but look at the contents. Five fine examples of their species, caught here on camera on surveillance duty outside the Sinn Féin offices in Gardiner Place in Dublin.

The accompanying article tells how the occupants were part of a ten-member, two-shift squad, weeing into milk bottles and so devoted to their duty that they'd sit in that unheated little car for hours on end. Watching, waiting, weeweeing.

Where are they now, I wonder? Probably still watching, waiting and weeweeing, 37 years later.