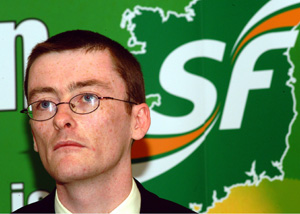 An Phoblacht's JOANNE CORCORAN met with Sinn Féin's South EU candidate, David Cullinane, this week to discuss the progress of his campaign in the old Munster constituency. David spoke about the issues he is hearing on the doorsteps, the advantage that being the youngest candidate in the race has given him, the fact that he is the only Waterford-based candidate running in the South, and the profile his campaign is giving Sinn Féin in his home county.

JC: David, you are the youngest candidate running in the South, do you see that as an advantage or disadvantage?

DC: It's a big advantage. That's something that is coming back on the doorsteps. People are looking for change, they're looking for new faces, but they're also looking for new ideas. That's what we're trying to get across. It's not just about Sinn Féin and a new face; it's actually a new approach to Europe and local government.

In terms of issues on the doorsteps — are people bringing up more local issues as opposed to European?

I think the big thing is that people are actually detached from Europe. We get mostly local issues — the housing crisis, the health service, double taxation, bin charges. It's these issues that are affecting people's lives, but I suppose we're getting across the argument that European politics is actually affecting their lives as well. We're losing our sovereignty, we're losing our neutrality, decision-making is being taken further away from people, and that impacts on the quality of their lives. We're making the arguments, but people are more concerned about the immediate issues that are affecting them.

There seems to be a phenomenon in this election where some people who wouldn't normally vote Sinn Féin are saying they will vote for the party in the European elections. Have you come across that?

To an extent, yes. I think it's a reflection of the fact that we have given leadership on Europe. We are the only party that's critical of Europe and can articulate the concerns that people have. We offer an alternative vision of what the EU can be. I think more and more people respect that.

There are people who are saying they are voting for Fianna Fáil or whatever in the local elections, but they are going to vote for Sinn Féin in Europe. Again, it's probably because they see that we are the only party going into Europe who actually want to deliver change. Of course, we have to convince them that we can deliver at local and national level as well, but I think we're winning that one. I try to get across on the doorsteps that we're an all-Ireland party, we want to go in to change Europe and not just become part of the system.

The European campaign officially kicked off last week. You've been working hard anyway, but will it be all out now until June 11?

I took a month off work to be full-time on the campaign, because it's important that we cover all the areas. The South constituency is a huge geographical area to cover, I have to get into Kerry, Cork, Limerick, Tipperary and my own constituency in Waterford, where we have to consolidate the general election votes. It's hard work travelling around, but I suppose all candidates from all parties have to contend with it. It's a long day, but I enjoy it and the time is flying in.

Is it difficult travelling from county to county?

A little hard work never goes astray, but I think most of the European election work is around media. I've been to every county in my own car but it's almost impossible for the candidate to canvass every door, in every town and village. So the media is important and we have a great team working on that.

You're running in the locals as well, aren't you?

Yes. We're hoping to take two seats in Waterford city and one in the county as well, which would be a massive breakthrough for us in the next general election.

We don't have any elected representatives in Waterford at all. But I've a big profile now, which has benefited the county and should continue to do so in the next election. Our long term plan is to take a Dáil seat.

Primetime poll placed you with a higher percentage than the Labour EU candidate in the South. Is Sinn Féin now seen as the real alternative to Labour in Europe?

Well, where are Labour on Europe? They tell us they're building a socialist Europe, but how can they build a socialist Europe on the back of a two-tier Europe, a Europe that is about centralisation and privatisation. Europe at the moment is too much about free movement of capital, not of people.

Labour's arguments are based on fraud and lies, the same as Fianna Fáil and Fine Gael, and people see us as the only alternative. And that's why I think that all across the South we have a good chance of out-polling Labour, not just in the EU elections, but in the locals as well. In the last European election we finished ahead of Labour, so it's nothing new here.

Who would you expect to see transfers from in these elections?

Well, should Labour and the Greens go out before us, those transfers could make a real difference. Ok, the opinion polls have put Sinn Féin at 6%, but they haven't factored in that I'm the only Waterford-based candidate and our strength is usually understated in opinion polls anyway. I think we'll come closer to between 8% and 10%. If that happens, and Gerry Collins (Fianna Fáil) polls poorly, which the opinion polls say he will, then Labour and Green transfers will be crucial.

Do you have a full-time team around you?

No, I think part of our weakness is not having full-time organisers in all the constituencies. In Kerry, of course, we have one, through Martin Ferris' wage, and then in Cork we've Ken O'Connell, but I think it's something we're working towards. It's a problem throughout the state.

But all of these elections are about party building. Five years ago, Sinn Féin in Waterford would have been virtually non-existent, but we've built it up, not just through me, but through lots of other party members as well. However, we're still not at the level where we can fully capitalise on the goodwill that's out there. Hopefully by the next election, we will be.