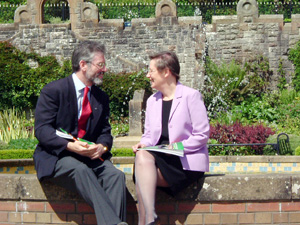 With just a week to go to the Six-County EU electoral contest, within the unionist and nationalist republican constituencies the campaigns of all the real contenders for seats are in top gear.

With four parties seriously contesting the three seats, it would seem an election of three winners and one loser. Not so, also up for decision is who commands most support in the nationalist and unionist communities. EU elections have always had a distorting effect on this political judgement, especially in terms of unionist voters. So for Sinn Féin, the SDLP, UUP and DUP there is a lot at stake.

There are few electoral contests in Europe as hotly and diversely contested as those held in the Six Counties It hasn't always been that way. In the mid-1930s, unionist gerrymandering of election boundaries and the abolition of proportional representation with a single transferable vote led to elections where up to one third of the constituencies were left uncontested as a single unionist candidate ran in each.

However, the period since the 1962 Stormont election, when the Northern Ireland Labour Party began to eat into unionist votes in the working class areas of Belfast, changed all that. Six-County electoral politics underwent seismic shifts as party popularity ebbed and flowed with at times tidal wave ferocity.

For nationalist and republican voters, the 1990s have seen the ongoing growth of the Sinn Féin vote. The party's first election of the modern period was the 1982 Assembly contest, taking just over 10% of the first preferences. This moved to 13.3% in the following year's Westminster election, that saw Gerry Adams first take the West Belfast seat while Danny Morrison just missed on a second in Mid-Ulster by 68 votes.

The intervening years were harder ones electorally. The SDLP vote grew, albeit by small margins, while the Sinn Féin vote stood still. The loss of West Belfast in 1992 to the SDLP after tactical voting by unionists who ignored unionist candidates to vote for the SDLP was the low point in the Sinn Féin electoral cycle. However, by the 1993 local elections the Sinn Féin vote began to grow again.

Last November's Assembly election confirmed the Sinn Féin growth, as the number of Assembly seats won rose from 18 to 24 and the Sinn Féin share of first preferences was even further ahead of the SDLP.

Bairbre de Brún could cement these results and maintain the party's poll lead over the SDLP.

It is the unionist vote that is more volatile. Ian Paisley won five consecutive EU elections for the DUP, topping the poll each time from 1979 on. However, it was only in the 1981 local elections and 2003 Assembly elections that the DUP party vote surpassed that of the UUP.

The 1997 Westminster election results overstate the UUP voter support, as in some constituencies the DUP gave them a clear run, such as in North Belfast to prevent the seat falling into nationalist hands.

What is clear is that in the years since 1997, UUP support has been slipping, the DUP's is growing, and the parties are now neck and neck. But without a Paisley on the ballot paper, how will the DUP poll in an EU election?