Remembering the Past - Michael Gaughan 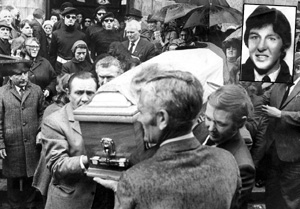 In June 1974, Ireland was in turmoil, as the Troubles were in their fifth year. In the Six Counties, internment without trial was in force and the British Army was on the rampage throughout nationalist areas.

British forces were colluding with loyalists openly and in secret and had bombed Dublin and Monaghan in May, killing 33 people. That same month, the Sunningdale Executive collapsed after the British Labour Government of Harold Wilson and Direct Ruler Merlyn Rees capitulated to the so-called strike staged by the Ulster Workers' Council. Seldom had such scenes reminiscent of fascism been witnessed in Western Europe since the Second World War. Right-wing loyalist paramilitaries kept workers out of their workplaces and mounted patrols and checkpoints under the gaze of the RUC and British Army. Loyalist death squads carried out sectarian killings at will.

In Dublin, the Fine Gael/Labour Coalition government of Taoiseach Liam Cosgrave was obsessed with the idea that the 26-County State was under imminent threat from republicans. Of course, the real threat was from those who had bombed Dublin and Monaghan, but after the bombings the Coalition's anti-republican crusade was stepped up.

Of the hundreds of republicans imprisoned at this time, the most vulnerable were those in English jails. Among them was a young man from Ballina, County Mayo.

Twenty-four-year-old Michael Gaughan had emigrated to London after he left school. In London he joined the IRA. Convicted of possession of a weapon and conspiracy to rob a London bank, Gaughan was imprisoned in Wormwood Scrubs, Albany and Parkhurst Prisons. On 31 March 1974, Michael joined other republican prisoners, including fellow Mayo man Frank Stagg, on hunger strike demanding an end to solitary confinement, education instead of prison work and a date for transfer to a prison in Ireland.

Since the days of the Suffragettes, British prison authorities had resorted to the brutal method of force-feeding in response to prison hunger strikes. Republican prisoner Thomas Ashe died in Mountjoy Prison in Dublin in 1917 as a result of force-feeding. Michael Gaughan was repeatedly force-fed during his 65-day fast. The procedure involved forcing a wooden clamp into the prisoner's mouth, through which a tube was passed. Liquid food was then poured through the tube, often entering the victim's windpipe. Michael died as a result of such treatment.

In accordance with his wishes, Michael's body was brought home for burial in the Republican Plot in Leigue Cemetery, Ballina. Thousands turned out to pay their respects in Dublin and along the route to his final resting place in Mayo.

The other hunger strikers ended their fast in the hope that Michael's sacrifice would be sufficient to make the British Government see sense. But after appearing ready to concede on the issue of transfer, the British reneged. Frank Stagg embarked again on hunger strike at the end of 1975 and died on 12 February 1976 in Wakefield Prison.

Appalled by the public demonstration of respect for an IRA Volunteer seen at Michael Gaughan's funeral, the Coalition determined to crack down and when, in February 1976, Frank Stagg died on hunger strike in Wakefield Prison, his body was hijacked and buried under concrete by the Garda Special Branch. However, Frank Stagg's wishes were also fulfiled and, later in 1976, the IRA reburied him beside Michael Gaughan in the Republican Plot.

In a last message to his comrades, Michael Gaughan described his motivation:

"I die proudly for my country and in the hope that my death will be sufficient to obtain the demands of my comrades. Let there be no bitterness on my behalf, but a determination to achieve the new Ireland for which I gladly die. My loyalty and confidence is to the IRA and let those of you who are left carry on the work and finish the fight."

Michael Gaughan died on hunger strike in Parkhurst Prison, England, on 3 June 1974, 30 years ago this week.