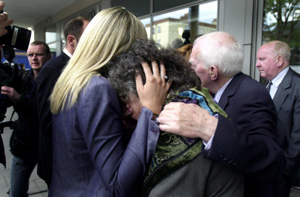 Annie Massey, whose daughter was killed, is comforted by members of her family after the inquest verdict was delivered

Relatives of the victims of the 1974 Dublin/Monaghan bombings have demanded a full public inquiry into the blasts, following the conclusion of the inquests into the deaths of their loved ones.

Last Thursday, the ten-member jury returned a verdict of unlawful killing by person or persons unknown.

During the inquest, the jury said that evidence pointed to the bombers being members of a loyalist paramilitary organisation. Dublin City Coroner Dr Brian Farrell read out the jury statement, which called for the verdicts to be sent to Taoiseach Bertie Ahern.

The jury also said the Dublin Government should consider sending it to the NIO Secretary Paul Murphy.

Bernie McNally, the chairperson of Justice for the Forgotten, speaking for the relatives, said: "There are issues for another forum. Many questions have been answered and the loss of each life was solemnly acknowledged here.

The Dublin Government reopened the inquest into the bombings just three weeks ago, to formally acknowledge how the 34 people died. The inquests were originally closed within two weeks of the bombings.

After hearing evidence from 123 witnesses, including survivors, Gardaí, technical and forensic workers, the jury returned its verdict late on Thursday evening 20 May.

Dr Farrell said: "It was savage cruelty for the bombs to have gone off without warning as people went about their business in Dublin and Monaghan that day."

No one was ever brought to justice for the bombings, the first three of which exploded at around 5.30pm on a busy Friday afternoon of 17 May 1974. Those explosions killed and injured people in Dublin's Parnell Street, Talbot Street and South Leinster Street. Another followed at 7pm in Monaghan.

Dr Farrell said it was a mass killing of international importance, and said that as well as the 34 killed, another 300 people were injured.

"There was an unconscionable delay completing the inquest," Dr Farrell said, as he apologised to the families for the 30-year wait for the verdict.

As the inquest was held in Dublin, it had no power to demand witnesses from the North or Britain give evidence.

After the verdict, Bernie McNally said: "Throughout the inquest witnesses were willing to attend and give evidence of collusion. They were not called to give that evidence because of the legal scope of the inquest. The Northern Ireland authorities went into hiding. They refused to attend the inquest even to confirm the basic facts about the bomb vehicles or the investigation they conducted in 1974."