Where will the Sinn Féin gains be made? 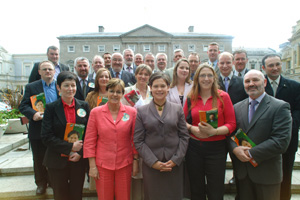 With just two weeks to go to polling day and with a growing number of polls and political pundits predicting gains for Sinn Féin in the EU and local elections, the question is where can the party's gains be realistically made.

An Phoblacht's ROBBIE SMYTH looks at the EU constituencies of East, South and West tracking the growth in Sinn Féin vote share over the last ten years. The trail he uncovers is one of breakthroughs yes, but also more logically a systematic growth pattern of party organisation and years of hard work on the ground in local communities reaping dividends for the party.

Rumblings in the deep South

South, the new three-seat EU parliament constituency, Munster without Clare, has been a major growth area for Sinn Féin.

In 1997, the party contested only three of the 13 Leinster House constituencies that make up the greater electoral region. They were Kerry North and Cork East and North Central.

The big breakthrough in the South in 1997 were the 5,691 and 15.91% of first preferences won by Martin Ferris in Kerry North. It was clear that electoral gains would be made in the 1999 local elections and then there was the possibility of a Leinster House seat.

In Cork City there were also significant gains made. The 1,654 votes won by Don O'Leary in North Central would elect a city councillor two years later. Jonathan O'Brien now holds the seat for the party.

Added to this in 2002 was new ground broken in Cork South Central and South West, where the first preference vote shares were 3.7% and 5.9% respectively.

Kerry North was undoubtedly the breakthrough constituency in 2002. Martin Ferris was elected to Leinster House after winning a massive 24.2% of first preferences.

It was the 1999 EU elections in which Ferris was the Sinn Féin candidate that pointed up the underlying growth in the party's vote. Sinn Féin polled 29,060 votes across Munster, yielding 6.48% of first preferences. Compare this to the 5,171 votes won in 1994.

In the 2002 Leinster House elections, Sinn Féin contested seven of the South constituencies. Outside of the four constituencies in Cork and Kerry North, the others contested were Tipperary South and Waterford.

Sinn Féin won 3.3% of first preferences in Tipperary South. However, the most significant growth in the eastern side of the constituency was in Waterford with David Cullinane, the Sinn Féin EU candidate for South this time, as well as running for a place on Waterford Corporation.

In 2002, Cullinane polled 2,955 first preferences and 6.3% of first preferences. Last week's Irish Examiner and Irish Times poll put the Sinn Féin vote share for South at 6%. With the party contesting council seats across South, the 6% mark could be breached on 11 June.

In 1994, Sinn Féin won 2.49% of first preferences in Leinster, with 6,523 votes. In the 1997 General elections the party only contested two of the nine constituencies in the new East constituency.

However, the EU vote grew to 20,015 votes and 5.85% of first preferences in 1999. The local elections held at the same time saw new breakthroughs for the party in Louth, Meath and Wexford and in 2002, Arthur Morgan was elected in the Louth Leinster House constituency.

The Sinn Féin growth in Louth and Meath is typical of the party's experience in other regions. In 1994, Joe Reilly was elected to Navan UDC. He held this seat in 1999 and added a county council seat and in 2002 was a strong challenger for a Leinster House seat.

In the Southern end of the constituency, there was also growth in vote share for Sinn Féin. The 1999 local elections had elected new councillors for the party onto Wexford Corporation as well as Enniscorthy, Gorey and New Ross Councils.

John Dwyer cemented this growth for the party, winning 4,964 first preferences, 8.2% of the total poll.

In 2002, Sinn Féin also contested four other constituencies in East. They were Laois-Offaly, what was then Longford-Roscommon, Westmeath and Wicklow, winning 3.4%, 4.1%, 3.4% and 2.8%, respectively.

Last weekend's Irish Times poll put the Sinn Féin vote share in East at 9%. With such uneven growth for the party in this constituency, it is hard to tell whether or not their predictions will add up.

Bitter fighting, poster wars and public slanging matches make the Northwest constituency compelling, and that's just the two Fianna Fail candidates battling it out. It is clear, though, that Sinn Féin is contesting strongly for a seat here.

In 1997, Sinn Féin contested just three of the nine constituencies that make up the Northwest constituency. It was here that Caoimhghín Ó Caoláin topped the poll in Cavan/Monaghan and won a seat for the party, with 11,531 votes and 19.37% of the total vote.

There was also an 8.11% vote share for Sinn Féin in Donegal Northeast and 7.1% share of first preferences in Sligo-Leitrim.

Caoimhghín Ó Caoláin retained his seat, while Sligo's Sean MacManus was just pipped for the last seat in Sligo-Leitrim.

The Sinn Féin challenge in the coming local elections will be very strong in the Northwest, with new seats in both Donegal constituencies looking possible from the 2002 results. In Galway and Mayo, there are also realistic possibilities of new Sinn Féin councillors being elected.

There have been two opinion polls so far on the North-West constituency. Last weekend's Irish Times/TNS mrbi poll put Pearse Doherty at 9%, while an Irish Examiner/Questions and Answers poll conducted by Lansdowne Market Research put the Sinn Féin vote share at 15%.

Dublin was the only 26-County EU constituency to come out of the electoral commission with unchanged boundaries and seat numbers. So it has four seats up for grabs, across four borough councils and 12 Leinster House constituencies.

In 1997, Sinn Féin contested only five of the then eleven constituencies in Dublin, winning 2.6% of first preferences and collecting 12,255 votes.

In 1999, there was a significant jump in the Sinn Féin performance. Going into the local elections, the party had just one seat across four councils, that of Christy Burke in Dublin's North Inner City. It jumped to six, two in South Dublin Council and four on Dublin City Council.

Sinn Féin made further gains in Dublin in the 2002 Leinster House elections. There were two TDs and a narrowly missed third as Nicky Kehoe was just pipped on the last count in Dublin Central.