Castlerea prisoners must be released 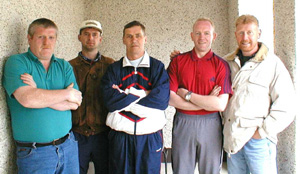 Sinn Féin President Gerry Adams confirmed this week that the release of the four remaining Castlerea prisoners had been included in the sequence of events that were derailed by David Trimble's withdrawal from last October's agreement to get the Peace Process back on track. Taoiseach Bertie Ahern had earlier confirmed that the release of the men, convicted in relation to the 1996 killing of Garda Jerry McCabe, would have formed part of an agreed sequence of events.

The past number of days have witnessed a media furore after the detail of the agreement reached last October was leaked by elements obviously opposed to the Good Friday Agreement and the Peace Process. The story has received massive coverage and the myth that the four men currently being held in the prison are not entitled to release has been propagated once again. Establishment opposition politicians have expressed outrage that the release might even be considered.

Speaking in Dublin on Tuesday, Gerry Adams said that if the sequence had been allowed to conclude, it would have seen "the Good Friday Agreement institutions back in place and a process to resolve a number of issues, for example arms and armed groups, Justice and Human Rights, demilitarisation, people on the run and other matters, including the release of the Castlerea prisoners".

He added that while the UUP had halted this sequence, the focus of the Sinn Féin leadership since then has been to get the process working again. "I am confident that that is An Taoiseach's aim also and we are working very closely to achieve this," he said. "This is an endeavour which should be supported by everyone who wants to make conflict a thing of the past, including opposition parties."

Adams' comments came just days after Martin McGuinness said that the Sinn Féin's position in relation to the prisoners has been very clear all along. "These prisoners are qualifying prisoners under the terms of the Good Friday Agreement and should be released," he said. "We will continue to argue and press for that."

On Wednesday, Tánaiste Mary Harney asserted that the release of the men would not be considered except in circumstances in which paramilitary activities had come to a complete end and the IRA was stood down forever.

Kevin Walsh, Pearse McCauley, Jerry Sheehy and Michael O'Neill (John Quinn has been released) are serving sentences in relation to the killing of Garda Jerry McCabe in Adare on 7 June 1996.

Throughout the Good Friday Agreement negotiations, Sinn Féin campaigned for the release of all political prisoners, republican and loyalist. Those released include people convicted of incidents that happened after the Adare robbery and the death of Jerry McCabe.

The four men in Castlerea are the only prisoners convicted in relation to incidents which happened before the signing of the Good Friday Agreement still incarcerated.

The Dublin Government has been the target of intense pressure from a variety of sources over the years to ensure that the Castlerea prisoners serve their sentences. The Garda Representative Association has consistently demanded that the men serve their full sentences and, with a few notable exceptions, the establishment media has forcefully pushed this line, often repeating inaccurate claims about the men and their case in print.

It is often stated, for example, that the IRA was on cessation when the attempted robbery took place. In fact the first cessation ended in February 1996 and the second was called in July 1997. The incident at Adare occurred in June of 1996. Pejorative terms are thrown about to confuse the issues at stake. The men are habitually referred to as convicted murderers when four were convicted of manslaughter, the unlawful and unintentional killing of a person, and one man, John Quinn, was convicted of conspiracy to commit a robbery.

When the Agreement was signed in 1998 the IRA had been on a 'complete and unequivocal' cessation for almost 14 months.

The Agreement states that the governments will "provide for an accelerated programme for the release of prisoners convicted of scheduled offences in Northern Ireland, or, in the case of those sentenced outside Northern Ireland, similar offences. Any such arrangements will protect the rights of individual prisoners under national and international law."

In the final section, the Agreement states that "any qualifying prisoners who remained in custody two years after the commencement of the scheme (June 1998) would be released at that point".

It is clear from the Agreement that the men in Castlerea qualify for release.

On 27 March 2003, rejecting an application for judicial review, the High Court in Dublin nevertheless found that John Quinn and Michael O'Neill "do fall within the category of persons who would be eligible for release under the relevant provisions". The judge stated: "They are affiliated to organisations which have maintained and are maintaining an unequivocal ceasefire. They are convicted of offences similar to scheduled offences in Northern Ireland. The offences in questions were committed prior to 10 April, 1998."

The judge ruled, however, that the Minister for Justice had discretion to refuse release.