Cory gives testimony to US Congress 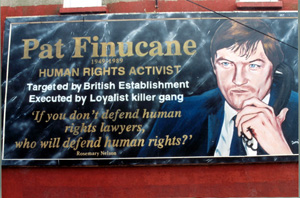 Former Justice of the Canadian Supreme Court, Judge Peter Cory gave testimony on his collusion report to the US Helsinki Commission last Wednesday, 4 May. Opening the proceedings in Washington, US Representative Chris Smith said: "We owe it to the memory of those slain, to their families, and to every person in Ireland who cherishes justice to see to it that the British Government immediately commences the public inquiry into the Finucane murder as recommended by Judge Cory and as promised in the Weston Park Agreement. No exceptions. No excuses."

Cory stated that the documents he reviewed indicated that there is evidence to warrant the holding of public inquiries. He described collision as a "cancer in society — it will grow greater if it is not dealt with". Regarding the 1989 assassination of Pat Finucane, Cory stated that documentation showed the solicitor to be a prime target of paramilitaries for nearly a decade before his killing, but no steps were taken to warn him of the dangers he faced.

The Canadian judge was joined by Pat Finucane's widow, Geraldine. She pointed to the "persistent efforts of the British Government to avoid a public inquiry at all costs".

Geraldine added: "I will not stop until I achieve my goal of a public inquiry that will fully examine all the evidence surrounding the murder of my husband. The common good is better served through truth and accountability."

Congressman Richard Neal read a letter signed jointly by himself, and Congressmen Jim Walsh and Peter King at the beginning of the hearing, addressed to Tony Blair and urging him to establish the inquiry.

Also this week, 12 Canadian MPs signed a petition calling for an immediate inquiry into Pat Finucane's murder. The signatories included members of the Bloc Quebecois, the Liberal Party, and the New Democratic Party. In a separate development, the New Democratic Parliamentary leader Bill Blaikie MP, has written to the British High Commissioner in Canada calling for an immediate inquiry.

Former Canadian Solicitor General and human rights advocate Warren Allmand, a longtime supporter of the peace process, has also spoken out on the case, explaining how "any public prosecution should not be allowed to delay in any way the setting up of an independent inquiry into the killing of Patrick Finucane. It is only through such an inquiry that the full truth surrounding this killing shall become known."

Meanwhile, at the High Court in Belfast on Tuesday, Geraldine Finucane sought an order to compel Direct Ruler Paul Murphy to establish a public inquiry into her husband's killing without further delay.

Murphy had told the British parliament that the inquiry was being delayed until the criminal justice system had been exhausted, including the trial of loyalist Ken Barrett, who is accused of the murder, and other possible trials.

Judge Gillen told counsel for Murphy that he required a clear indication as to whether it is intended to hold an inquiry, irrespective of timing, before adjourning the hearing until Monday 17 May, when he will rule on the admissibility of an amended statement filed by Mrs Finucane's lawyer.

In the new statement, Geraldine Finucane accused Murphy of "bad faith" in refusing to establish an inquiry and that "his expressed reason is not the true reason" and he was "party to an attempt to block a public inquiry'. She also stated that Murphy had erred in law in holding there was a requirement to wait until criminal proceedings were completed.