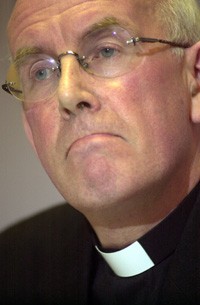 The record of the upper echelons of the Catholic Church in Ireland as defenders of nationalist community in the Six Counties is not, with a few exceptions, a glorious one. Throughout the conflict, the hierarchy all but ignored the injustice of the Stormont regime and the atrocities committed by agents of the British state, whilst consistently directing most of its spiritual firepower at republicanism.

The speech last week at a conference in London by Archbishop Seán Brady continued that political approach, with only the mildest deviation. In amongst the usual call for Catholics to "vigorously challenge" the actions of "non-democratic armed groups", the Bishop had, for once, suggested to his audience that the police force in the North was not acceptable to nationalists and could be reformed at quicker pace than at present. He asked that all parties to the process "go an extra mile" to ensure that the PSNI become more accountable and thus more acceptable to the nationalist community.

He also remarked that the failure to set up a proper inquiry into the death of Pat Finucane was not helpful to the peace process and asked that unionism accept the principles of the Good Friday Agreement — hardly incendiary and nothing that has not been said a thousand times before. Indeed, so uncontroversial was Dr Brady's speech that the Chief Constable Hugh Orde agreed with him and so did the ultra-unionist Belfast Telegraph, which referred to his words as "thoughtful" and "balanced".

The DUP, and Ian Paisley Jr in particular, did not see it that way. Enraged (again) by the suggestion that the police force should not be simply there as a service to the unionist community, Paisley labelled Dr Brady a "terrorist sympathiser", saying that his speech "leaves Protestants [or the "right-thinking" ones at least] to conclude that the RC Church is now taking the Sinn Féin/IRA line on policing issues, that Brady has set down his prayer book and Mass card for a copy of An Phoblacht to get his inspiration from".

Sadly, as soon as he heard this usual DUP mix of cheap, hysterical over-reaction and politically half-baked sectarian rubbish, Dr Brady — perhaps predictably enough given the hierarchy's historic dread of being associated in any way with republican ideals — rolled over and, in contrast to Paisley, immediately rushed to a local radio station to 'clarify' his remarks.

What he had really meant when he pointed out the acknowledged fact that the British Government had colluded with loyalism to murder people and that policing in the Six Counties was currently unacceptable, he explained, was that the IRA should disband.

Of course, he had actually done just that, in so many words, in his original speech but because he had not mentioned the IRA by name, it provided the UUP's John Taylor with an opportunity to consciously feed into unionist paranoia about the Catholic Church. "If he was impartial, he would have demanded the IRA be disbanded at once," he said. "His failure to mention the republican paramilitary group shows everyone where he is."