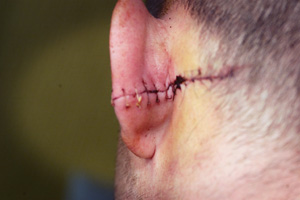 In a week which has seen an increase in sectarian attacks across the Six Counties, unionist paramilitary bombers targeted Catholics in Randalstown in County Antrim and Maghera, County Derry and a Catholic man was lucky to escape alive after a machete attack in North Belfast.

Also, a number of Catholic schoolboys were attacked by a hammer wielding gang in Glengormley, North Belfast while vehicles belonging to members of a Catholic football team were damaged as they turned out for a game in Ballymena.

A 30-year-old North Belfast Catholic escaped with his life after a vicious sectarian attack on Saturday 1 May.

The man, who wishes to remain anonymous, almost lost his ear in the attack and told the media that doctors who treated him in the Mater Hospital said he had lost so much blood that he was lucky to be alive.

The man said he was walking home from a party along the Cliftonville Road at around 10.30pm when a car pulled up beside him and three loyalists jumped out.

They shouted, "Get the Fenian Bastard", and slashed him across the head with a machete. The blow almost severed the man's ear as it opened a wound from his eardrum to the base of his skull.

The man now says he is so traumatised by the attack that he does not want to return to his flat, which overlooks the scene of the attack.

"Many people are not aware these attacks are happening due to the lack of media coverage. I am also critical of the silence of unionist representatives who seem to get camera shy when these attacks occur."

Three 13-year-old boys, attending Hightown school, were attacked by a gang of loyalists wielding hammers on the Glebe Road West in Glengormley Wednesday 5 May as they were going home from school.

Two of the boys were treated in hospital for severe bruising to their bodies as a result of the sectarian attack.

The following night, Thursday, in a separate attack, two boys aged 13 and 15, were stopped by a gang of loyalists who asked them if they were Catholics. When the boys said they were Catholics two of the loyalists threw them to the ground and jumped up and down on their hands.

On Saturday night 8 May, unionist paramilitaries planted a pipe bomb near a busy hotel in Maghera.

It was discovered around 10.20pm in Main Street after a telephone warning claimed a device had been left in the area.

A number of premises, including the hotel, were evacuated and the road was closed while British Army bomb disposal men made the device safe before removing the remains for forensic examination.

The Protestant Action Force has admitted attacking three Catholics homes in Randalstown, County Antrim, in the early hours of Monday 10 May.

Two pipe bombs were discovered outside houses in the Meadows and Station Road areas shortly before 3am. The third device was found outside a Catholic home at Portglenone Road at around 9am.

The Samaritans received a telephone call from a man purporting to represent the Protestant Action Force, a cover name used by the UVF.

Sinn Féin Antrim Councillor Martin Manus said this was a blatant attempt by unionist paramilitaries to stir up sectarian tensions in Randalstown.

A soccer match involving the Catholic Broadway Celtic team had to be abandoned in Ballymena on Saturday 8 May after a gang of loyalists attacked team cars.

The team vehicles, which were parked at the changing rooms in Brooke Park at the Wakehurst playing fields in the loyalist Harryville area, were targeted at around 11am.

The referee was forced to abandon the match against the Protestant Dale Farm team after the loyalist gang threw bottles and other missiles onto the pitch.