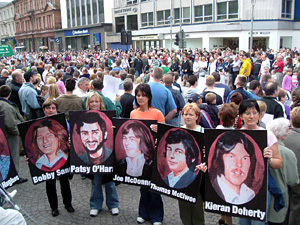 Thousands of republicans from across Ireland arrived in Belfast on Sunday 9 May to attend the annual 1981 Hunger Strike commemoration parade. People from across the nine Ulster Counties were well represented at the parade. Feeder marches from Twinbrook in West Belfast, Ardoyne in North Belfast, Short Strand in East Belfast and The Markets in South Belfast made their way through Belfast's streets to the main rally point at Belfast City Hall.

Portraits of the ten 1981 Hunger Strikers and of Michael Gaughan and Frank Stagg, who died on hunger strike in England, were in evidence. Most striking this year, however, was the sight of hundreds of people carrying photographs of the many nationalists and Catholics killed by British crown forces and their proxy killers in the loyalist death squads during the past five decades of conflict.

At City Hall — on the stage adorned with the immortal words of Bobby Sands — Let our revenge be the laughter of our children — a message from Ógra Shinn Féin was read out.

Then, Pauline Davey-Kennedy, daughter of assassinated Sinn Féin Councillor John Davey, accused the British Government of organising a "campaign of political terror" when they "developed a new policy of murder by proxy known as collusion".

She explained how her father was killed by the UVF with weapons brought into the North by British agent Brian Nelson and MI5.

"My father was effective and he stood up for his people. He was outspoken in his opposition to British rule and to unionist bigotry and the British decided he should die.

"But like criminalisation, the policy of collusion failed and it failed because of the courage of my father an those like him who refused to be terrorised, intimidated or defeated".

The main speaker of the day was West Belfast MLA Bairbre de Brún, the party's Six-County candidate in next month's European elections.

She likened the British Government's attempts to criminalise the republican struggle in the '70s and 80s with attempts by the present British administration under Tony Blair to criminalise republicans using the so-called Independent Monitoring Commission (IMC), electoral manipulation and the political moves that brought down the power Executive at Stormont.

"Then, like now, the objective of the British Government was to prevent change," she said. "Now, like then, republican objectives are to bring change about.

"Sinn Féin will refuse to bow to this policy of criminalisation and disenfranchisement and this march today sends out a clear message to the British Government that we will not be criminalised and we will not be marginalised."

Turning to collusion, the former Health Minister said that "this is an unresolved issue and in the interests of justice and reconciliation it must be addressed. The murder of citizens through collusion with unionist death squads has been and remains a British state policy in Ireland."

"Another echo from the Hunger Strike period is the apparent inability of the British Government to stand over agreements it has reached with republicans," she added.

"The last five years have seen Tony Blair's Government renege on key elements of the Good Friday Agreement and on subsequent agreements emerging from negotiations."

Bringing a close to the rally, renowned Belfast singer and musician, Pól Mac Adaim, respected for his support of political causes from the struggle of the Palestinian people and the continuing hunger strike in Turkey, sang the ballad Joe McDonnell.