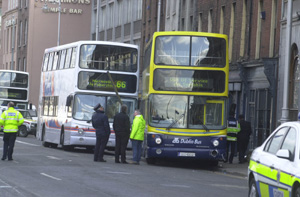 The scene of the fatal accident in Dublin

Could a tragedy similar to the one that occurred on Dublin's Wellington Quay last 21 February, which claimed the lives of five people, happen again? The answer, according to the recently formed Independent Workers' Union, is yes. The new union has reacted angrily to recent news stories claiming that the accident at Wellington Quay was caused by human error. The union members say that the stories were based on a report that has not investigated all the possible causes of the accident.

Several articles in the media, allegedly based on leaks from the official report into the accident, have asserted that one of the drivers involved in the crash left the bus in gear with the handbrake on, and when the other driver got on he took the handbrake off and the bus lurched forward. One paper's headline actually screamed 'Human Error', before adding that the report had recommended drivers switch off their engines before getting off a bus.

However, members of the IWU have discovered information highlighting mechanical defects in automatic buses as a possible important contributory factor to the accident. They fear that investigators may not have not fully probed this possibility.

Speaking to An Phoblacht last week, Dublin representative for the union, John Carroll, expressed the worry that the drivers involved in the incident might be "hung out to dry". He said that several drivers have researched the possibility of a mechanical error being the cause and found what they believe to be relevant information.

"We were concerned when this accident happened that there would be a witch-hunt of the drivers involved. We believe that there are actually bigger problems with the buses that aren't being investigated and may have caused this accident," Carroll said.

He pointed to a similar accident, which took place in England in December 1998, when a driver with 25 years' experience was suspended after crashing into a bus stop and killing two women.

The bus involved in the crash was a Dennis Dart bus, and the action against the driver infuriated bus workers around Britain, particularly those who had driven Dennis Darts. When the bus careered into the two women, the driver said he had felt a sudden surge of power in the engine, which he couldn't control. Many more drivers came forward to back up their colleague, explaining that they too had experiences of power surges in buses, especially when moving off.

The problem came to a head in 1992, when there were 13 cases of alleged surges in Dennis Darts, six of which resulted in collisions. Complaints were made to the company, which steadfastly refused to admit any problems, blaming the power surges on the possibility of the drivers pressing the accelerator pedal in the belief that they were pressing the brake. However, all of the drivers involved insisted that they had had their feet firmly on the brake. In one case, where a woman was being trained as a driver, her instructor verified that the woman's foot was on the brake but this hadn't stopped the bus jumping forward.

According to Carroll, many drivers in Dublin have experienced similar incidents.

"To the best of our knowledge, Dublin Bus does not use Dennis Dart engines," Carroll said. "But bus engines are interchangeable and extremely similar. I've met many drivers who have had incidents where the bus has just accelerated. They usually attribute it to a personal mistake, but then they meet other drivers and realise that it's happened to others as well. In fact, many drivers are on record as having made this complaint in the past."

The IWU is hoping that Dublin Bus and the other parties involved in the investigation will contact the English bus unions to find out more about this sort of mechanical error.

Many of the surges with Dennis Darts occurred when the buses were moving off in bus stations where the speed limit is 4mph. At such slow speed a sudden surge by jamming a foot on the accelerator can easily be rectified by switching to the brake. All the drivers insisted they had slammed their feet on the brakes and in many cases pulled the handbrakes as well, but the buses had plunged on.

"In 1996, another driver was in a similar situation in England," Carroll said. "He was being prosecuted for dangerous driving, but his union were able to present evidence of a similar surge, and the driver was declared not guilty by a unanimous decision.

"We don't know if this is exactly what happened in the Wellington Quay accident, but we don't think that it has been looked at as a possibility. The reports in the paper about it being down to human error should not, in our minds, have received the prominence they did. The investigating team should at least explore every possibility before making a call on the whole thing being down to human error. Because, in the end, we've all experienced incidents where the bus has been out of our control, and if that is not investigated, then you could be looking at a similar accident happening again."