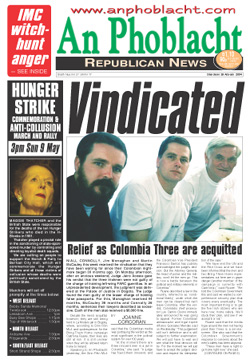 Niall Connolly, Jim Monaghan and Martin McCauley this week received the vindication that they have been waiting for since their Colombian nightmare began 33 months ago. On Monday afternoon, after an anxious weekend, Judge Jairo Acosta gave his verdict that the three Irishmen were not guilty of the charge of training left-wing FARC guerrillas. In an unprecedented development, the judgment was delivered at the Palace of Justice in Bogota. The judge found the men guilty of the lesser charge of holding false passports. For this, Monaghan received 44 months, McCauley 36 months and Connolly 26 months, sentences their lawyers described as excessive. Each of the men also received a $6,000 fine.

Despite the men's acquittal, however, they are still being held in La Modelo jail in Bogota, where, according to Sinn Féin MLA and spokesperson for the Bring Them Home campaign Caitríona Ruane, their lives are still at risk. It is still unclear when they will be allowed return home to Ireland.

Speaking to An Phoblacht yesterday, the Sinn Féin MLA said that the Colombian media was portraying the verdict as the most significant in the judicial system for over 100 years.

"At the moment there are three innocent men in a jail in Colombia," she said. "A judge has found them innocent, and the Colombian Vice President Francisco Santos has publicly acknowledged the judge's decision. But the Attorney General, the head of police and the military, won't let the men go. This is now a battle between the political and military elements in Colombia."

Ruane described a law in the country, referred to as 'conditional liberty', under which the men can be cleared but can't leave Colombia. After the verdict, Colombia's chief prosecutor Luis Camilo Osorio immediately announced he was going to appeal. Former Colombian ambassador and legal expert Alfonso Gonzalez Mendes said on Wednesday: "This judgement still isn't definitive and is still subject to further examination. We will just have to wait and see what the final decision will be. For the moment we will just have to accept the judge's decision and respect his interpretation of the case."

"We have met the UN and the Red Cross and we have been informed that the men and two Bring Them Home representatives out here are in grave danger (another member of the campaign is currently with Caitríona)," said Ruane. "We told the Colombian Government this and said we wanted a comprehensive security plan that covers every eventuality. The most important thing is to get the five Irish citizens who are here now, home safely. We'll study their plan, and see if we accept it or not."

Ruane said that the media hype around the men not having paid their fines is a smokescreen. She also said that the Colombian Government's response to concerns about the men's safety has been abysmal.

"These men have a right to go home right now," she said.

"We have met with the judge and examined his verdict. He was severely critical of the military and police evidence and of the Attorney General's Office. He was also critical of the US forensics test, saying that it was not technically or scientifically sound. He recognised Keith Borer as an independent, respected expert, and accepted his forensic evidence without question."

Ruane added that two witnesses who perjured themselves for the prosecution are now under investigation. In a similar situation to the Supergrass trials of the '80s in the Six Counties, one of the men is believed to have done the circuit of the country's courtrooms, testifying against hundreds of witnesses. Ruane said it will be interesting to see how many people have held in jails, like the three Irishmen, on this witness's evidence.

"The Colombian Government now needs to rein in the military and police," she said. "The men are in very good spirits, but they are still worried about their safety. This is completely unacceptable. We want them sent home now. We're calling on the international community to lobby and phone their Colombian embassies for their release."

Ruane said that the Dublin Government is making representation at the highest level, and has put in writing its demands for the men to be sent home. As we go to print, Ruane had left to visit the men in jail and to attend a meeting with the Colombian Government to hear their proposals for the group's security.

Relief and joy greeted the news of the verdict as it came out on Monday.

Sinn Féin TD Sean Crowe, who attended the trial and visited the men on many occasions, expressed his relief and delight for the men and their families. "There was never any justification for this trial in the first place and it is clear that there were those who were intent on using these three men for their own political agenda - an agenda which at its core was about damaging the Irish Peace process," he said.

Sinn Féin President Gerry Adams also welcomed the verdict, stressing the need to get the men home as soon as possible. Gerry Kelly MLA called the whole affair a "travesty of justice" and asked that the men now be allowed to get on with their lives in peace.

A travesty of justice

It is just over eight months since the trial concluded. Arrested in Bogata's El Dorado airport on 11 August 2001, the men were charged with training left-wing FARC guerillas in bomb-making techniques and holding false documentation. Their trial did not begin until October 2002, more than a year after their arrests, and finally ended in August 2003.

In statements they made during the trial, the three men said they came to Colombia to witness the peace talks that were occurring at that time. According to Connolly, "I was motivated by my desire to see firsthand another process of conflict resolution in motion." Jim Monaghan said they had spent several weeks in the FARC-controlled zone. "We talked to a great many people. We shared experiences about the peace processes in Ireland and Colombia."

The IRA stated early on that had not sent any of its members to Colombia to engage in military cooperation with any group.

However, the men's case was hampered by severely prejudicial comments made by senior Colombian military and politicians.

Six months after they were arrested, former-President Andrés Pastrana wrote in the Washington Post: "Some months ago, IRA members were captured in Colombia after training FARC guerillas in urban terrorism." The same month, then-commander of the Colombian Armed Forces, General Fernando Tapias, told the US House Foreign Relations Committee that the three men "are leaders within the IRA structures in their field and they have been in Colombia for a long period and they are involved in training the FARC in terrorist activities". As the trial ended, he called for the maximum sentence of 20 years to be imposed. During the trial, Colombian President Alvaro Uribe told Newsweek magazine: "We have IRA men in jail for training the FARC."

The publicity surrounding their arrest and detention and the allegations made in various media outlets in Ireland, the US and Colombia also ensured that the three men could not obtain a fair trial. Evidence presented during the trial consisted of blatant lies, tainted forensics, and false witnesses. The Colombian military claimed that satellite images would prove the allegation that the men were training the FARC, a claim that was later withdrawn.

During the trial, the prosecution's two witnesses, one an alleged FARC deserter, claimed to have witnessed the three Irishmen training guerrillas on earlier visits to the rebel safe haven in 1999 and 2000. But all three defendants were able to prove to the court that they were not in Colombia on the dates the witnesses claimed to have seen them. In fact, in one instance, Niall Connolly was at an Irish Embassy dinner in Havana, Cuba, on the day on which a prosecution witness claimed to have seen him in Colombia. The men also had video evidence to prove they weren't in the country.

Dr Keith Borer, a renowned independent forensic scientist, examined all material in regard to the forensic tests carried out at the US Embassy and stated in court that there was no forensic evidence against the men. Colombian forensic tests proved negative after 113 tries to find a positive result. Dr Borer also testified that FARC technology was unchanged during this time and that FARC and IRA technology were and remain very different.

While faulty and inaccurate allegations were forwarded by the prosecution, evidence prepared by the defence team were not taken into account. Judge Acosta himself received death threats from right-wing paramilitaries in an effort to pressure him into imposing a maximum sentence on the men.

The three men conceded the lesser charge of traveling with documents containing false names, which in Colombia is punishable with a fine and deportation.

While in jail, the men suffered horrendous conditions. Threats were made to their lives, and at one point, food was brought in from outside for fear of poisoning. They were held for several months in extremely confined conditions, without adequate access to fresh air or light in El Dijin, the main police holding centre in Bogota, in violation of Colombian law. The men are currently held in La Modelo jail, with mainly right-wing paramilitary prisoners.

Their lawyers were constantly harassed and refused entry to their clients because they would not, on principle, agree to remove their belts, ties, jackets, shoes and shoelaces as demanded by prison officials. The lawyers are also under threat of attack from paramilitary groups.