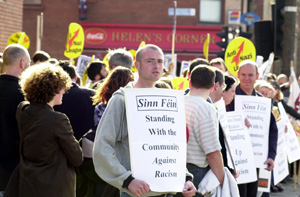 Sinn Féin Dáil leader Caoimhghín Ó Caoláin said in Leinster House on Wednesday that "this dangerous, divisive and reactionary referendum" should not go ahead.

He was speaking during a special Dáil sitting to debate the Coalition Government's proposed constitutional referendum to restrict the right to Irish citizenship.

He said if the government refuses to listen to the wide range of opinion that is concerned about the referendum then "Sinn Féin will campaign vigorously for a 'No' vote." He accused the Government of "stirring the pot of ignorance, fear and bigotry".

The government wants to hold the referendum on the same day that voters will go to the polls for the local and EU elections. Regardless of the substance of the proposed referendum, all the opposition parties have been vociferous in their objections to its timing, pointing out the undemocratic and rushed nature in which this referendum issue has surfaced.

So when Michael McDowell stood up to make his speech in the Dáil at the beginning of the debate on Wednesday morning, it was to an angry and defiant House. McDowell largely ignored questions and points of Order, however. His response was to call the tone of the debate "childish and pathetic", one of "petulance".

During the debate, Caoimhghín Ó Caoláin raised the concern of many that McDowell has no statistical evidence to back up the spurious claims about massive numbers of non-national mothers giving birth in Dublin hospitals.

The question has been put to the Minister again and again: of the numbers he bandies about on non-national mothers giving birth, how many are to those legally living and working here? As Ó Caoláin said, "even if it is accepted that there is such a problem, it is wrong to assert that it can only be rectified by a referendum which will fundamentally alter our citizenship laws and our Constitution". McDowell avoided the query again, saying "the figures are not within my remit to gather". Only when the figures are to his advantage does he gather them, it would seem.

The implications of this amendment on the Good Friday Agreement cannot be underestimated, nor can the manner in which the referendum has suddenly been sprung upon the electorate, said Caoimhghín Ó Caoláin. He pointed out that when he asked the Taoiseach in mid-February if there would be a constitutional referendum this year, Ahern's answer was very clearly 'No', going so far as to say: "The complexities involved in holding a referendum require that careful consideration be given to the frequency with which referenda can realistically be held and the significance of the issues in question."

How incredible, then, that McDowell should announce his intentions to hold one less than a month later. It would certainly seem that Ahern misled the Dáil with his reply, especially considering the evidence that has also emerged that 300 further electronic voting machines were ordered in January because of "strong indications that there may be a further ballot paper at the June polls".

A dangerous consequence, he said, is the fact that Ian Paisley and the DUP now see the Agreement as one that "can be changed at the whim of the governments, acting either together or separately".

Aengus Ó Snodaigh raised the issue of the Anti-Racist Protocol for Political Parties, which all parties signed up to last month and which, he said, McDowell had promptly violated by railroading this legislation through and attempting to persuade the electorate that this Constitutional amendment is urgently needed. One of the most obvious ways in which he has violated this is in frequently using pejorative terms like "citizenship tourism".

This is not the type of term one would expect from a Minister for Justice and Equality. But rather than withdraw it or apologise for carelessly bandying such a term about, McDowell went even further in inciting racist tendencies with the term "maternity holiday" and claimed that citizenship was "a significant pull factor" for women giving birth here.

Ó Snodaigh told him that "as Minister for Justice and Equality, Michael McDowell has a special responsibility to challenge the racist misconceptions out there, not to reinforce them as he has cynically done to justify his own ideological agenda."

The debate, according to Ó Snodaigh, was distracting people away from the government's inability and unwillingness to address the problems in housing and healthcare, where it obviously suits the Government to allow people - particularly those more marginalised - to blame non-nationals and in particular pregnant non-nationals for the lack of resources in relation to their welfare. This, said Ó Snodaigh, was a use of "common myths about immigrants" to fuel the debate and persuade people of the need for this amendment.

Seán Crowe referred to the International Convention on Civil and Political Rights, which establishes rights of each person as equal before the law, without discrimination on grounds of colour, race, etc. He also made reference to the Human Rights Commission (HRC), which is developing a position paper on the proposed legislation.

The HRC was established to make informed judgements on these matters, yet the government has chosen to ignore their recommendations in favour of their own, he said. Crowe also made the point that Ireland is more than a back door to Europe. He said that the fact that so many people from other nations are making Ireland a destination country is "a great compliment and a heartening indication of the positive light in which Ireland is seen throughout the world".

He said that an adequate immigration policy is what is needed, not a rushed referendum to fundamentally alter the constitution, which currently says we will "cherish all the children of the nation equally".

The Campaign Against the Racist Referendum held a protest outside Leinster House at 6.30pm on Wednesday evening. The debate/special sitting is scheduled to finish at 6.30pm on Thursday and will be voted on when the Dáil resumes next week.