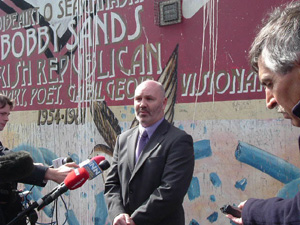 The IMC is a smokescreen for exclusion operating outside the Agreement. It has no positive role to play." Alex Maskey

The Sinn Féin president was speaking after republicans responded angrily to the publication of a report by the IMC described by the Sinn Féin party leader as discriminatory, full of duplicity and double standards, politically contrived and partisan. The Commission was attempting to subvert the democratic and electoral rights and mandate of Sinn Féin and those of our electorate, said Adams.

With the acquiescence of the Dublin Government, the British imposed the International Monitoring Commission, a quango conceived outside the terms of the Good Friday Agreement, in a doomed attempt to save David Trimble and the UUP last year. Ironically the imposition of the IMC is now poised to strengthen Trimble's unionist rivals, the anti-Agreement DUP.

Predictably, in the wake of IMC report, DUP deputy leader Peter Robinson called for the immediate exclusion of Sinn Féin from the political process. The other parties should "push on" without Sinn Féin, said Robinson. Of course, disenfranchising a majority of nationalists in order to reinstate unionist domination in the north has consistently been the objective of anti-Agreement unionism.

Sinn Féin had opposed the establishment of the IMC from the outset and the grounds of the party's opposition have largely been vindicated by the fundamentally flawed nature of its operation. Sinn Féin's Bairbre de Brún dismissed the IMC as a front for the "securocrats who have done so much to damage the process already".

The profiles of the four appointed commissioners were, from the start, a clear indication that the ethos would be virulently anti-republican. John Grieve is a former senior officer in the London Metropolitan police; John Alderdice a former leader of the Alliance party; Joseph Brosnan, former Secretary General of the Department of Justice in the south of Ireland; and Richard Kerr, a former deputy director of the CIA in the United States.

In other words, at the behest of anti-Agreement unionism, the two governments handed over determination of the political process to senior members of the old securocrat community and a long-standing political opponent of Sinn Féin.

And now we find ourselves in the ridiculous position of sanctions being imposed and exclusion threatened against the largest pro-Agreement party on the island of Ireland. And this, we are being asked to believe, is in the interests of the Agreement.

The incorporation of 'independent' in the title of the IMC was always a misnomer but it has been never more clearly exposed than in the terms of its first report. Here, hearsay and rumour replace fact and evidence. Here, allegations against unionist paramilitaries are deliberately fudged to heighten the perception of a case against the IRA.

In its report, the IMC confirms what the PSNI is saying on the basis of briefings from the PSNI. It is hardly surprising that the report endorses every word PSNI chief Hugh Orde has ever uttered, even where his allegations have already failed to stand up in court. Independent is a word wholly inappropriate to characterise the operation of the IMC.

"We will take advice, technical and legal and we will respond and fight the British Government on this matter," vowed Sinn Féin party chair Mitchel McLaughlin.

"Sinn Féin is a party which suffered 25 years of censorship and repression. It didn't stop our politics then and it won]t stop us now. Is the British Government foolish enough to think that the imposition of financial penalties will defeat Sinn Féin?

"We defeated the politics of exclusion and censorship. The attempt to use the artificial mechanism of the IMC will not succeed any more than previous attempts to exclude Sinn Féin. We are the biggest pro-Agreement party for a very good reason. We are good on the process and we are good on the ground and the electorate know that," said McLaughlin.

Since the signing of the Good Friday Agreement, the securocrats, Special Branch, British Military Intelligence and other covert agencies, those who have controlled the political agenda in the north for decades, have sought to regain ascendancy over the process.

For these anti-Agreement power pockets within the British state, ending the conflict in the north is still sought within a notion of defeating the IRA. They know they can't do it but their determination to pursue the old agenda is beyond consideration of the practicalities. Their anti-republicanism is fundamentalist and their main objective within the peace process has been to sabotage political progress and reform, thwart the promise of power sharing and re-impose unionist domination.

The British Government, and particularly Tony Blair, have either willingly or foolishly allowed the political process of securing peace, equality and democracy to be distorted, delayed and diminished by the anti-Agreement lobby within the British state.

Hamstrung by contradictions within its own body politic and bedazzled by revisionism, the Irish state has allowed the British to set the agenda. No further example is required than the recent comments by the current Minister of Justice.

In an anti-republican diatribe during Easter week, McDowell disavowed the contemporary republican struggle. "The modern Irish state is the Republic. There is only one Republic — it's the one established by the Irish people," insisted McDowell but he was not quite able to avoid the obvious contradictions inherent in his opinions.

In a clear distinction from the "only one Republic" of his previous sentence, McDowell anticipated a "Genuine Republic" in the future. McDowell told RTé he is looking forward to a united Ireland, organised along republican principles.

"I do believe that there is an immense logic in favour of a united Ireland — a nation of six million people which was genuinely a Republic in which the orange and green meant something in which there was fraternity," said McDowell.

Tragically, the Irish state has played a less than honourable role in the current Peace Process. It has been, at best, a poor advocate for northern nationalists and an inadequate defender of the interests of the Irish people as a whole.

The cancellation of political talks due to be held in London next week has been condemned by Sinn Féin President Gerry Adams, who described this as "unacceptable".

It had been expected that the parties, together with the British Prime Minister and Irish Taoiseach, would meet at Lancaster House next week in an attempt to get the political process back on track before the summer.

"The cancellation is an example of the ad hoc and almost casual attitude of London and Dublin towards the process," said Adams.

The sudden cancellation, an official source told the media, is because the two governments and the parties were "not ready" and more work needed to be done to make the prospect for talks viable.

Republican sources suggested that the British Government had not been working very hard to create a good atmosphere for the planned Lancaster talks, but "had been planning for failure". These sources further suggested that it was the Dublin Government that had instigated the cancellation of the talks.

The IMC was not scheduled to report until the summer and the decision to produce an earlier 'interim' report specifically aimed at republicans has been seen as an attempt to manipulate the political process. The 'interim' report was sparked in the wake of highly spurious allegations that characterised an incident, little more than a pub brawl, as an IRA operation.

The 'timely' publication of the IMC report and its systematic 'leaking' to the British media has been seen by many commentators as an indication that the British are, at best, disingenuous in their declared commitment to getting the peace process back on track, or at worst, have collapsed into endorsing the agenda of their anti-Agreement securocrats.

Speaking on the eve of publication, Sinn Féin's Alex Maskey had said the timing of the IMC report was clearly political. "Many people will be angered at the actions of this unrepresentative and unelected Quango exerting a negative influence over the peace process," said Maskey.

The British Government has confirmed that it will impose financial sanctions against Sinn Féin and the PUP following the IMC's recommendations. Addressing the British House of Commons, NIO Secretary of State Paul Murphy said he was "persuaded that it would be right to remove for a period the entitlement to the block financial assistance paid to assembly parties in respect of both Sinn Féin and the PUP".

Murphy went on to say that the commission had found that paramilitary activity was at a disturbingly high level and that on the basis of the report he believed that the scale of paramilitary violence since January 2003 had been "worryingly high".

Meanwhile, the IMC has threatened to name "some senior members of Sinn Féin" who commissioners believe are also "senior members of the IRA". The IMC said it would have recommended the exclusion of Sinn Féin from the Assembly had the political institutions been restored.

Most republicans will see the imposition of sanctions as yet another attempt by the British Government to erode Sinn Féin's growing political strength.

At the heart of the Good Friday Agreement is the promise of power sharing and equality. To date the British Government has repeatedly, and illegally, suspended the power sharing institutions and systematically tampered with the operation of the electoral register, introducing measures most likely to be detrimental to the Sinn Féin vote. The introduction of sanctions will introduce further inequality into the electoral system by denying the electoral mandate of the largest nationalist party parity of esteem.

"Sinn Féin does not accept the validity of financial penalties or any other sanction on us or any other sanction on us or anyone else for something that somebody else may or may not have done," said Belfast MLA Alex Maskey. "It is a ridiculous idea." The IMC report has "vindicated our position that the Body is little more than a tool to be used by the British Government to undermine the electoral mandate of Sinn Féin," said Maskey.

"The irony of a Body, set up by the British, who are themselves in breach of the Good Friday Agreement, passing judgement and recommending sanctions over participants in the Peace Process, is not lost on the broad nationalist and republican community.

"Sinn Féin's position on the IMC is very clear. It is a smokescreen for exclusion operating outside the Agreement. It has no positive role to play," said Maskey.

"Sinn Féin is responsible only for the actions of Sinn Féin. No party has done more to help make this process work than Sinn Féin. Our record of commitment to this process is beyond question.

"Sinn Féin is not prepared to have its rights and entitlements and those of the majority of nationalists in the north undermined or diminished by the British Government through its proxy the IMC."