Dublin must stand up and defend Agreement 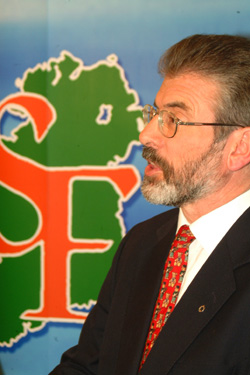 Speaking to Sinn Féin activists and the media in Dublin on Tuesday evening, an irate Sinn Féin President Gerry Adams responded to the publication of the IMC Report. The following is the text of his remarks.

My remarks today will deal with this afternoon's report from the so-called Independent Monitoring Commission. I will also outline the Sinn Féin view of the Irish Government's stewardship of the Good Friday Agreement process at this time.

The IMC was established by the British and Irish Governments last year, at the demand of David Trimble. It is clearly in contravention of the Good Friday Agreement and we said so at the time.

We were under no illusions. The role of the IMC was to facilitate the exclusion of our party, to soft pedal on unionist violence and to entirely ignore the behaviour of the British government - the party most in breach of the Good Friday Agreement.

The Commission is not independent. That much is obvious from its remit, its membership and the fact it bases its decisions on reports from the PSNI, the British Army and the securocrats who continue to dictate the British government's attitude and action on the peace process. The pretence of it making recommendations to the two Governments is an undemocratic political farce.

The Commissions report is a proxy report by the securocrats which recommends sanctions against Sinn Féin - despite the clear fact that we are not in any way in breach of the Agreement, nor did they suggest we were.

It reduced the ongoing unionist paramilitary campaign almost to a postscript and exonerated the two governments entirely.

And where did the Commission get their information? From the same people who so outrageously raided our offices in Stormont in a blaze of publicity, and the same people who tried to collapse the negotiations which led to the Good Friday Agreement, by getting Sinn Féin expelled from the talks in early 1998.

With the British Government waging war in Iraq these elements are obviously in the ascendancy within their system. These are the agencies indicted in the Barron report, in the censored Cory report and in every investigation into collusion in recent times.

The duplicity and double standards in the report are outrageous.

For example, the British Government recently sought to excuse its refusal to allow a fully independent judicial inquiry into the killing of Pat Finucane, on the basis that a person is facing trial.

There are four people facing trial over the Tohill affair. Yet this matter is investigated at the request of the two governments and is a substantive part of this report and the reason for its publication at this time.

And it has to be noted that the speed with which this report has been issued - a matter of three months since the Commission first met and despite ongoing legal considerations — stands in stark contrast to the shabby treatment which the British and Irish governments have meted out to the family of Pat Finucane, who have waited 15 years for justice. They continue to wait.

In addition, while accepting that Sinn Féin is not in a position to actually determine the policies or operational strategies of the IRA, the Commission recommends financial penalties against Sinn Féin.

This is a nonsense position. It is a politically contrived conclusion that has no basis in fact.

The Commission's recommendations are clearly discriminatory and subvert the democratic and electoral rights and mandate of Sinn Féin and of our electorate.

We will challenge it by every means at our disposal and at every door we go to in the upcoming election campaign. We will also put responsibility for the current crisis precisely where it belongs — with the two governments. The Commission, after all, is the child of the two governments. It is only doing what it was set up to do. Its report is a sham.

But the thinking behind the establishment of the Commission is symptomatic of the flawed attitude of the two governments for some time now.

Sinn Féin has developed, argued for and promoted a strategy, which will see an end to armed groups. It was that strategy which led to the peace process in the first place and to the Good Friday Agreement, which is a product of that process.

There is a logic behind our strategy which is essentially about upholding the rights and entitlements of citizens, building a sustainable process of change and making politics work.

In private both governments tell us that they support and see the logic of that position. Though not all Irish government Ministers would subscribe to that strategy.

Sinn Féin is also against criminality of any sort. And we deeply resent any attempt to besmirch republicans with that label.

However, it is obvious that has been a major rethink in the position of the governments and particularly the Irish government. The Government's current position is wrong. It is short-term, party political and totally contrary to the politics of peace making. The Government must return to the Good Friday Agreement.

It is a historic fact that for a long time successive Irish Governments were willing to blindly follow a British Government led agenda.

The development over the last decade of inclusive, conflict resolution type processes saw a potential for the emergence of a new inter-governmental relationship. Under the terms of the Good Friday Agreement both governments are called on to act as co-equal partners on all the issues dealt with by the Agreement.

But the great difficulty was always going to be in implementing the Agreement, not least because of the powerful forces of reaction who are against the changes which peace requires and which the Good Friday Agreement supports.

An option for the British Government is always to do as little as possible. It also has to be said that the challenges facing the governments are not to be underestimated.

It takes a singular focus and relentless tenacity and resilience to retain the approach the process demands. And of course governments have their own interests. And those who are in government have their interests also.

In my view, these narrower interests are taking precedence over the need to defend and implement the Agreement.

The governments did not envisage the Good Friday Agreement becoming the instrument for the real change that it has the potential to be.

They envisaged an alliance between the UUP and SDLP with a fairly anaemic programme of reform that those parties would accept.

And they did not foresee the growth of Sinn Féin.

As we now know, the electorate decided differently. But the governments have not accepted their democratically expressed wishes. On the contrary they are using the IMC to actively subvert democratic wishes and entitlements.

Since the Assembly elections last November, the Irish Government has led the charge in a reckless way, driven by the upcoming elections, in a vicious

propaganda offensive on the democratic rights of that section of the electorate who vote for Sinn Féin.

The Assembly election results undoubtedly sparked this. The aim is to influence the outcome of the local government and European elections in June.

The Irish Government has also moved to bring about a referendum on Irish citizenship which is a breach of the Agreement and they did so without consultation with any of the parties to the Agreement.

The haste with which they have moved on this matter is in stark contrast to their failure to legislate for the rights of citizens with disabilities or to bring in the rights of northerners to be represented in southern institutions.

I consider the government's position on the issue of Citizenship to be racist.

What is required is a full debate and an open and fair immigration policy. I welcome the SDLP's interest in this issue. They should join with us in campaigning against the government's amendment.

So, for all of these reasons there is justifiable concern about the current state of the process.

This was heightened last night by the sudden cancellation of the talks due to take place next week.

I am seeking urgent and separate discussions with the Taoiseach and the British Prime Minister on all these matters. I have conveyed these concerns to their most senior officials.

I have always been reluctant to publicly criticise the Irish government but I have a duty to uphold the rights of our electorate and the integrity of the process which is so crucial for the future of all the people of this island.

I make my remarks more in disappointment than in anger. Sinn Féin is well able to defend ourselves but the process is more important than that and no matter about our differences on other issues I have no wish to be at odds with the government over the peace process. It is above party politics.

I look forward to working on the basis of the Good Friday Agreement with the Taoiseach. This means that the Irish Government need to step up to the mark. It needs to stop allowing the British Government to set the agenda in the peace process. It needs to stop setting the Good Friday Agreement and the rights and entitlements of nationalists and republicans aside at the whim of unionists — whether it is David Trimble or Ian Paisley.

Republicans want this process to work. We have invested hugely in it and taken enormous risks. Our commitment is to see the Good Friday Agreement implemented but we cannot be the only ones to take risks. The only way these difficulties will be resolved is if the governments re-engage properly with the Peace Process in a way that respects the rights of everyone involved and in the terms of the Good Friday Agreement.

As far as Sinn Féin is concerned that is a point of political principle.