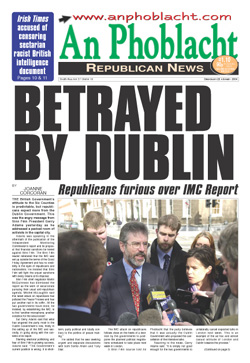 THE British Government's attitude to the Six Counties is predictable, but republicans expect more from the Dublin Government. This was the angry message from Sinn Féin President Gerry Adams yesterday as he addressed a packed room of activists in the capital city.

Adams was speaking in the aftermath of the publication of the Independent Monitoring Commission's report and its proposal that financial sanctions be levied against Sinn Féin. The Sinn Féin leader reiterated that the IMC was set up outside the terms of the Good Friday Agreement and has no credibility in the eyes of republicans and nationalists. He insisted that Sinn Féin will fight the unjust sanctions with every means at its disposal.

Sinn Féin chief negotiator Martin McGuinness has dismissed the report as the work of securocrats pursuing their usual anti-republican agenda. Mitchel McLaughlin said this latest attack on republicans has polluted the Peace Process and has put another nail in its coffin. All the two governments have done, he insisted, by establishing the IMC, is to find "another microphone, another voicebox for the securocrats".

But Gerry Adams said that what has angered the party most is the Dublin Government's role, firstly in the setting up of the IMC and secondly, in going along with the contents of its report.

Blaming electoral politicking and fear of Sinn Féin's growing success, Adams said: "The Government's current position is wrong. It is short-term, party political and totally contrary to the politics of peace making."

He added that he was seeking urgent and separate discussions with both Bertie Ahern and Tony Blair.

The IMC attack on republicans follows close on the heels of a decision by the governments to postpone the planned political negotiations scheduled to take place next week in London.

A Sinn Féin source told An Phoblacht that the party believes that it was actually the Dublin Government who proposed the cancellation of the intensive talks.

Reacting to the news, Gerry Adams said: "It is simply not good enough for the two governments to unilaterally cancel expected talks in London next week. This is an example of the ad hoc and almost casual attitude of London and Dublin towards the process."

Pointing out that, historically, southern governments were willing to blindly follow a British Government-led agenda, Adams said that in the last decade, particularly since the signing of the Good Friday Agreement, the Dublin Government has had the opportunity to be an equal partner in decisions on the Six Counties. However, narrower interests have taken precedence over the Peace Process.

He pointed to the government's dismal record, including their premature movement on policing in July 2001, which broke the nationalist consensus at the time; their acquiescence to the collapse of the Assembly and the Executive; their silence on the cancellation of the May 2003 elections; and their failure to honour the agreement made last October.

He also pointed to the vicious propaganda offensive they have launched against Sinn Féin and its voters.

Adams said that in addition to all of this, the Government's proposed citizenship referendum is in complete breach of the 1998 Agreement.

He said he had always been reluctant to publicly criticise Dublin, but he had a duty to uphold the rights of the electorate and the integrity of the process, "which is so crucial for the future of all the people of this island.

"I make my remarks more in disappointment than in anger," he said. "Sinn Féin is well able to defend itself but the process is more important than that and no matter about our differences on other issues I have no wish to be at odds with the government over the Peace Process. It is above party politics. "This means that the Irish Government needs to step up to the mark. It needs to stop allowing the British Government to set the agenda in the Peace Process."