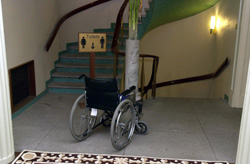 Do you believe in the power of the EU average? This week, three separate reports from the EU Commission, the Equality Authority and the Conference of Religious in Ireland (CORI) all highlight serious shortcomings in how the 26 Counties measures up on key economic and social criteria compared to the EU average.

The 26 Counties is the top economy in terms of the Stability and Growth Pact criteria, but bottom when it comes to social welfare spending and lagging seriously behind when it comes to education and employment opportunities for the disabled.

While the value of EU comparisons are at times questionable, watch this space, as the rules of the game will change hugely come 1 May, when the ten accession states join. With a coalition government that love to cherry pick the measures and comparisons that suit them best, be prepared for more selective use of the 'EU average'. This week, EU averages become all the more important.

If you are suffering a chronic illness or are disabled, the 26 Counties is not the place to be looking for a job or an education. A new Equality Authority report, titled Disability and Labour Market Participation, has found that Irish people with disabilities are more likely to be poorly educated and unemployed than the disabled in other EU states.

In terms of second level education, 18.9% of disabled EU citizens are finishing school compared to 10.9% in the 26 Counties.

Rights across the EU

"Social Protection" is a term used by CORI to measure how much funds and resources are being spent on protecting the weakest in society. According to their analysis, the 26-County state comes bottom of the EU in this area.

Sweden spends 32.3% of its Gross Domestic Product, a measure of how much wealth is created in an economy annually, on social protection. The EU average is 27.3%, whereas in Ireland the percentage falls to 14.1%.

CORI believes that "any society is measured by how it treats its most vulnerable people. By this measurement Ireland is failing dismally". CORI argues that, "Ireland's poorest people have been effectively excluded from what is required to live life with dignity".

Other EU and international comparisons picked out by CORI include how much of GDP is spent on public healthcare. For the Dublin Government, the figure is 5.1%, compared to 5.8% in the USA, 8% in Germany, 7.2% in France, 6.8% in Denmark, 6.2% in Belgium and Sweden, 5.5% in the Netherlands and 5.9% in Britain. The CORI Report, titled Priorities for Fairness, also states that "throughout Europe, the governments of countries such as Norway, Austria, Italy, Spain, Portugal, Slovakia, Croatia and Slovenia all allocate a greater proportion of GDP to health expenditure".

CORI proposals include an additional €1.5 billion spending annually on tackling the inequities identified in their 187-page report.

The conference also proposes that social, economic and cultural rights be recognised in the constitution. They have seven different categories of rights, which include "sufficient income to live life with dignity; meaningful work; appropriate accommodation; relevant education; essential healthcare; cultural respect; and real participation".

Also of interest is the proposal that these rights be instituted on an EU-wide basis.

One interesting marker highlighted in the CORI report and echoed in some of the other EU statistics released in the last week is the strong performance of the 26-County economy. The 26 Counties last year recorded the third highest figure for GDP per person globally.

This week, the EU, according to the EU Commission's Spring Economic Forecasts, has told us that the 26-County economy will probably grow more than any other EU state or the USA and Japan. Added to this is that six eurozone states are not going to meet the stability and growth pact criteria for spending and borrowing. France, Germany, Greece, Italy, the Netherlands and Portugal will breach the criteria this year. Of the ten new EU states, only four meet the stability and growth criteria.

Apart from the glaring double standard of the failing Stability and Growth Pact and how it doesn't seem to matter any more now that the four largest EU states are unable to meet its conditions, there is another interesting aspect to the EU Commission's economic forecasts.

The Commission has concluded that the coalition government must do more to tackle childcare in terms of affordability and access as well as tackling gender wage gaps in the 26 Counties. It seems that on these important issues we are once again below the EU average.