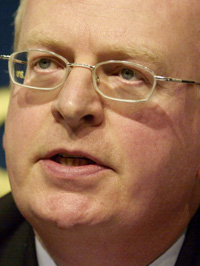 In a transparently cynical pre-election move Fine Gael, Labour and the Greens combined in the Dáil last week to table a motion seeking to blame the IRA and, by implication, Sinn Féin for the impasse in the Peace Process. We carry here an edited version of the Dáil contribution in response from Sinn Féin Dáil leader Caoimhghín Ó Caoláin

The motion is ostensibly based on the Good Friday Agreement. Its real political context, however, is the anti-Sinn Féin crusade of the Minister for Justice, Equality and Law Reform and President of the Progressive Democrats, Deputy Michael McDowell. Minister McDowell has decided that such a crusade is a good electoral ploy for his party, especially in its battle for Fine Gael votes, just as he did when he launched his own personal election campaign in 2002. But the Minister and his colleagues in Government have no regard for the impact of his utterances on the Sinn Féin by citing Minister McDowell's accusations. "What better witness could I call?" asked Mr. Paisley. Is that the kind of endorsement the Deputies who support this Cabinet want to receive for their policy on the Peace Process?

Sinn Féin will not be distracted by any of this. We are committed to the Good Friday Agreement and to its full implementation. We recognise what has been achieved so far and what has yet to be achieved. We take our responsibility very seriously and we stand on our record of achievement. We have delivered and we continue to deliver. So we will not take party political point-scoring dressed up as solemn homilies on our commitment to democracy. We are democrats and we are committed to totally peaceful and democratic means of achieving our political objectives. Both governments and all political parties who have been party to the Good Friday Agreement are supposed to be involved in a process of conflict resolution. A key part of that is to recognise that all armed groups — the IRA, the British state forces and their auxiliaries the loyalist paramilitaries have been involved in the conflict. The British state has yet to acknowledge even a share of responsibility for the conflict, including the deaths of hundreds of people at its hands since 1969. It has yet to dismantle its military apparatus in our country. This alone exposes as absurd the notion that the IRA can be wished away or made to disappear with a magic wand waved by Sinn Féin.

Equally absurd was the statement from Deputy Kenny that the IRA won't go away without what he called the full rigours of the law. For Deputy Kenny's information that was tried for decades North and South of the Border. A so-called law and order solution failed and failed miserably. The lesson was learned and that is why we have a Peace Process.

Deputy Kenny and others praised the DUP. Fair enough. Sinn Féin has also recognised movement on the part of the DUP where appropriate and we will continue to encourage them. But what Deputy Kenny and others prefer to forget is that the DUP is an anti-Agreement party. They are in no position to accuse Sinn Féin of being in breach of the Agreement since they themselves reject and denounce that Agreement.

To ignore that reality, to feed DUP intransigence, to play to the agenda of the British securocrats who are trying to defeat republicans in peace as they failed to do in war is to subvert the entire peace process. It is to act as recruiting sergeants for so-called dissidents who will try to say that peaceful methods have failed. I urge Deputies to think very carefully about that and to measure their approach accordingly.

Sinn Féin does not seek a slap on the back for our role in bringing about a new direction for republicanism, including the IRA cessations since 1994. That was not our role alone. What we do seek is a continued commitment from the Irish Government and from all sides in this House to the process of change which made that new direction possible.

Deputy Rabitte said he wanted to see a post-IRA Ireland. So do I. I want to see a post-IRA Ireland, a post-British Army Ireland, a post-collusion Ireland and a post-British colonial Ireland. He referred to the dark secrets of the past. I will avoid the temptation to delve into the dark past of the so-called Official Republican Movement of which Deputy Rabbitte was once a member. I will just say that I am glad that no obstacles or preconditions were placed in his path to the Cabinet table and that his democratic mandate has been recognised at all times.