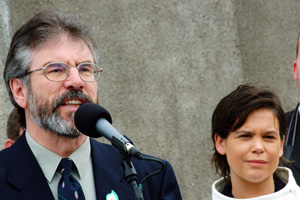 Crisis in the Peace Process

The following is the text of the speech delivered at Glasnevin Cemetery on Easter Sunday by Sinn Féin President GERRY ADAMS.

"No one should underestimate the depth of the crisis facing the Peace Process at this time. There are substantial difficulties that need to be overcome.

The British Prime Minister has said he wants to break the stalemate by June, and that after Easter there will be an intensification of this effort. Mr Blair has also warned that this process cannot stand still. If it fails to move forward, he says, it will move backward. The logic of this analysis is that the British Government must ensure that the process moves forward.

For months now, Sinn Féin has argued that the two governments need to take the lead in putting together a structure of talks that deals with the seriousness of the situation. So I welcome Mr Blair's remarks and I expect that there will be a concentrated effort to resolve the outstanding issues in the next few weeks.

I believe that if the political will exists, even the serious and vexed issues facing all of us at this time can be resolved. To that end, Sinn Féin has remained in contact with the two governments and the other parties.

I know that Irish republicans have that strength of will to resolve these issues. I am not confident that the two governments have it. I am certainly not confident that the leaders of political unionism have it. So, let me spell out what we believe is required from the two governments and the unionists if there is to be progress after Easter. And none of this is rocket science. So, let's get real.

Does anyone in the two governments really believe that blaming republicans for the current crisis is creating the proper atmosphere for serious negotiations? If the governments are serious about this Peace Process, then they need to convince republicans and nationalists.

This requires actions not words. It requires movement not rhetoric. London and Dublin must accept that they have to inject new momentum into the process. They can do this by honouring their respective commitments in the Good Friday Agreement, in the Joint Declaration and in the discussions with us last October.

Let us be clear: both governments entered into commitments, covering a wide range of issues from prisoners, through policing, demilitarisation, northern representation in southern institutions, equality, human rights matters and more. There was to be immediate and substantial progress on all of these. There was none.

Instead, we have the suspension of the institutions of the Good Friday Agreement, a totally unacceptable situation. The governments have not moved an inch since October other than to try and blame republicans again for the crisis. This is also unacceptable. It is also untrue.

I want to now deal with the state of play within unionism. Sinn Féin respects the mandate of the DUP. The DUP must respect the Sinn Féin mandate. However, the current position of the DUP, its opposition to the Agreement and the demands it is making of Sinn Féin, are totally unacceptable.

Sinn Féin is strong enough and big enough and confident enough in our own politics to talk to anyone. In fact, we have a duty to do so. So do the DUP. But like John Major at the start of this process, the DUP is demanding that the IRA publicly surrender before the DUP will even sit down and talk to Sinn Féin.

Can anyone imagine the IRA dashing off to obey the DUP diktat? Does Mr Paisley imagine that P O'Neill was just waiting for this demand from him? Surely wiser counsel will know that a sensible approach is about dealing with these issues collectively.

So the DUP's current public position will not resolve the difficulties in the process and no one in the British or Irish Governments should pretend that it will — not if Mr Blair is serious when he warns that this process cannot stand still, when he says if it fails to move forward it will move backwards.

The unionists, but especially the DUP, have to know that although they can refuse to work the institutions, they will have no veto over the many other matters of human rights and equality, policing and demilitarisation, of rights and entitlements.

Clearly, therefore, the restoration of the institutions of the Good Friday Agreement has to be the priority at this time. That also is the logic of Mr Blair's stated position.

Republicans have demonstrated time out of number our willingness to find agreements. Our commitment and our hard work on behalf of this process is unequalled by any other participant. It comes from our desire to see an end to conflict and a new future for everyone on this island do our best to make that work but only the actions of the governments can determine how successful we will collectively be in the weeks ahead.

Whatever the outcome of any negotiations around the peace process, Irish republicans face challenges in the coming months. In June, as the only all-Ireland party, we will be fighting to win seats in the European Parliament. And we can do it. Last November, Sinn Féin became the largest nationalist party in the north and the largest pro-Agreement party. I believe we can build on that success. I have canvassed widely North and South and the response has been very good.

If everyone here today, and at commemorations across this island, rallies round our all-Ireland team of EU candidates we can make significant gains in June and send MEPs to Strasbourg and Brussels who will defend Irish national interests while seeking support for Irish unity and Sinn Féin's peace strategy.

What does this mean for the city of Dublin? If you do the work it means that Mary Lou McDonald will become the first Sinn Féin MEP for the capital.

Sinn Féin is also standing over 200 candidates in the local government elections, the largest number of candidates we have put forward in decades. I am in no doubt that we are set to make significant gains and that the face of local government politics is about to change — and change for the better.

And we have seen the conservative parties' reaction to this. They would rather create a smokescreen than debate the issues.

There is also the upcoming bogus and racist referendum on citizenship. This is a complex and sensitive issue, which the government is cynically exploiting without regard to the negative consequences for Irish society and the Good Friday Agreement. The government's decision has virtually guaranteed that race will become an election issue.

It is also in stark contradiction of the 1916 Proclamations commitment to "cherish all the children of the nation equally". The truth is that the government is afraid to lose this referendum as they did with the first referendum on the Nice Treaty.

So, my friends, we have lots of work to do it in the time ahead.

Next year marks the 100th anniversary of the founding of Sinn Féin. In 2005 we will celebrate this with a yearlong series of events. Here in Dublin, where the party first met and where the Republic was declared, Sinn Féin is on the march. I can think of no better way to approach the centenary of our party than with the largest number of Sinn Féin representatives here in the capital."