Talks can refocus process - But governments must show political will 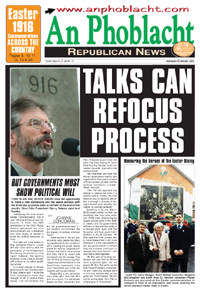 Tony Blair and Bertie Ahern have the opportunity to instill a new momentum into the peace process with the three-day proximity talks to be held at the end of this month, Sinn Féin President Gerry Adams said last Sunday.

Addressing the main Dublin Easter Commemoration, one of over 100 events held all over the country to mark the 88th anniversary of the 1916 Rising, Adams welcomed the talks announcement and a statement from Blair saying he wanted to break the political stalemate by June.

The talks are to be hosted by Blair and Ahern in London and will come shortly after the publication of the Independent Monitoring Commission's first report. However, that report is expected to be unfairly slanted, with a focus on so-called republican activity.

"Does anyone in the two governments really believe that blaming republicans for the current crisis is creating the proper atmosphere for serious negotiations? London and Dublin must accept that they have to inject new momentum into the process. They can do this by honouring their respective commitments in the Good Friday Agreement, in the Joint Declaration and in the discussions with us last October."

Responding to the announcement of the talks, Sinn Féin MLA and Six-County EU candidate, Bairbre de Brún, echoed the Sinn Féin President's point that the party has been saying for some time that the Review could not resolve the wider crisis within the peace process.

"We have been very clear that the two governments need to take urgent action if the peace process is to be put back on track and the political institutions re-established," she said.

"Sinn Féin will approach any attempt to resolve this crisis in a positive fashion. Clearly, the most effective way of resolving difficulties is through a process of dialogue based upon equality and respect for political mandates."

Speaking in Tyrone, Martin McGuinness pointed out that last November Sinn Féin came within just 15,000 votes of becoming the largest political party in the North of Ireland and the governments will have to deal with the reality of a stronger party again after the European and local government elections in the 26 Counties. "Mr Blair says that if the process fails to move forward then it will move backward. It is the responsibility of the two governments to ensure that the process continues to develop and move forward," said Sinn Féin's chief negotiator.

"Mr Blair said at his party conference last year that he did not have a reverse gear. Let me assure Mr Blair that as far as the Irish Peace Process is concerned, he won't need one because there is only one direction that we are going and that's forward. We are not for turning back. Sinn Féin is not giving up on this process."