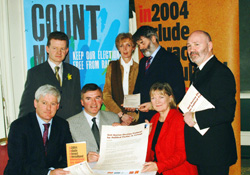 Sinn Féin has rejected the Dublin Government's plan to strip the citizenship rights of children born in Ireland to non-national parents as violating rights secured under the Good Friday Agreement. Michael McDowell announced last week plans for a referendum that may coincide with the local and EU elections in June.

"This goes against everything Sinn Féin has worked for in building an Ireland of Equals, and is also contrary to the Good Friday Agreement. We reject the Government's proposal as dangerously irresponsible.

"The Government is constructing this as an election issue in order to deflect attention away from their abysmal record on health, housing, education, and indeed the Minister's refusal to confront the problem of high crime rates and the failures of policing in working-class communities. The Government is particularly trying to scapegoat non-nationals for the crisis in the hospitals system to deflect from their mismanagement over almost ten years. This is totally unacceptable. The Irish people can see through this pre-election ploy and won't fall for it.

"The Minister has twisted the facts to fit his ideological agenda. He knows that his proposal will inflame bigotry and poison the national atmosphere but he is prepared to do this in the hopes of electoral gain. As it stands, racism in this state has prompted a rising level of hate crime, which has already resulted in assaults and deaths. It is the height of ministerial irresponsibility to politically exploit this issue and it once again calls into question the fitness of Michael McDowell for his post.

"The fact remains that the people have spoken on the issue of citizenship in their overwhelming endorsement of the Good Friday Agreement. The Government has already subjected us to a referendum re-run on the Nice Treaty. We do not need a re-run of this issue too. The proposed referendum should not go ahead. Not during an election campaign. Not at all.

"Whatever about the policies of some EU states, Ireland is not alone in the democratic world in granting citizenship on the basis of birth. We are in the good company of Canada and the United States. If anything, we should be encouraging other EU states to consider de-racialising their own citizenship laws to bring them into line with this democratic practice.

"Therefore, we are taking the opportunity of the commencement of European Week Against Racism to call on the government to use the Irish Presidency to do the right thing and send the right message - of respect for a truly diverse and inclusive Ireland and EU."

Wake up call on racist referendum

At a meeting in the unusual surroundings of the Shelbourne Hotel, Inez McCormick from Belfast, Robbie McVeigh from Derry and Davie Joyce from Dublin, delivered a stark warning in relation to the promised referendum to deny the rights of children, Irish citizens, born to non-nationals. They were speaking at a seminar organised by the Irish Council for Civil Liberties, entitled Democracy, Diversity and Dissent. The seminar was packed: people from NGOs, members of the Commission for Human Rights, activists who work with Travellers, refugees and anti racist-groups. It was an audience of the 'usual suspects'. It was a call to arms, to wake up to the changes that are happening all around us in the struggle to vindicate the rights of the marginalised.

Inez McCormack summed it up in a snapshot. She described meeting Michael Collins, who had been one of those representing Travellers on the Task Force, which had been in negotiations with Department of Justice that very afternoon. He had gone home to learn from the TV news of the Criminalisation of Trespassing Bill, which the government had never even mentioned at their consultation that very afternoon. "The anger, the humiliation on his face, that they had been so tricked, so deceived, so betrayed," she said. "Partnership is only effective in relation to your power."

It was this bill that woke many people up to notice the huge changes that have been taking place around us over the past five years or so.

Robbie McVeigh talked of this Act against the Travellers, which criminalises their right to pursue a nomadic lifestyle, and he drew the parallel with the explicitly racist referendum McDowell proposes to coincide with the forthcoming elections. He said it would dismantle the commitments made in the Good Friday Agreement and deny Irish citizens their most basic of rights - to stay here.

Inez talked of the position of migrant workers in Ireland today, who our economy relies on. "The EU Ministers are defining, behind closed doors, the definition of competition, a definition that will encompass labour and social economic rights," she said. "There is no consultation on this definition."

She quoted Mary Robinson, who has talked of the position of ìbonded servitudeî which the workers who come to Ireland find themselves in. She went on: "They are moving the democratic goalposts to suit an economy that will produce further injustice.

"The time now is to speak. All of our rights are threatened."