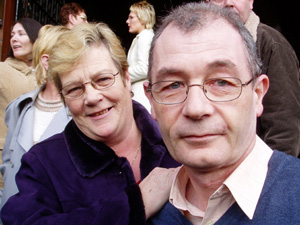 Kay Duddy, sister of Jackie Duddy and Michael McKinney, brother of William McKinney, are pictured outside Derry's Guildhall last Friday after the last witness gave evidence to the Bloody Sunday Inquiry and the public hearings were adjourned after more than 900 witness testimonies and 1,700 statements.

Before he closed the proceedings, Lord Saville warned that one potential IRA witness is to be reported for contempt. He said he was reporting the man — known as Provisional IRA 9 — for refusing to cooperate with the tribunal.

He also ruled that no action would be taken against two journalists — Lena Ferguson and Alex Thomson — who refused to disclose the names of soldiers they had interviewed.

Saville and his two fellow judges, William Hoyt and John Toohey, are expected to deliver their findings next year, more than seven years after British Prime Minister Tony Blair announced the inquiry.

The families issued a joint statement to mark the end of this phase of the Saville Inquiry, demanding that their loved ones be vindicated.