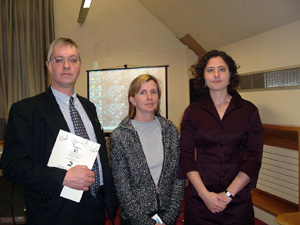 Mike Ritchie of Coiste na nIarchimí, Louise Purbrick from the University of Brighton and Liz Sevcenko from the International Coalition of Historic Site Museums of Conscience

For republicans, Long Kesh, first as an internment camp, then as a theatre of struggle around the issue of Political Status in the notorious H-Blocks and as the stage of the Great Escape (one of many) has an obvious historical role to play.

But for others it is the site of a discredited British policy that many would sooner erase and forget, not least the British Prison Minister with responsibility for the site, who recently declared that the Kesh/Maze should be razed to the ground as soon as possible and consigned to history.

On Wednesday I attended the launch of Coiste na n-Iarchimí proposals for the establishment of a museum at the former prison site.

I went to the press conference with the notion that yes, Long Kesh was a historically and politically significant site which should be preserved in some form of museum but also with the feeling that even if we were successful, all we would have for our troubles would be a few miserable buildings on a derelict site. How wrong I was. How lacking in imagination and vision for the future.

Addressing the launch was Liz Sevcenko from the International Coalition of Historic Site Museums of Conscience. Liz had travelled from New York not only to pledge her support for the Long Kesh/Maze museum project but also to describe her organisation's work at other sites of conscience throughout the world. And it was amazing.

Sites that already form part of the coalition include Angel Island Immigration Station in the USA, Arbejdermuseet Workers' museum in Denmark, Auschwitz/Birkenau national museum in Poland, District Six Museum in South Africa, Gulag Museum at Perm 6 in Russia and the Lower East Side Tenement Museum in America.

The beauty of these projects doesn't only lie in the preservation of historical sites but also the way in which the museums are used to promote dialogue and address current political concerns. For example, the Tenement Museum has recreated the garment workers' makeshift 'sweat shops', in which a large proportion of the immigrant who originally lived and worked.

But it is also used as a location in which current issues of immigration and employment can be explored and challenged. The museum has acted as one of the few locations in which the present day garments industry has confronted the reality of some of the working conditions it is imposing on its workforce.

"Sites of Conscience commemorate places where human rights and democracy itself were cruelly attacked, bravely defended or hotly debated," said Liz. "Visitors use the history of what has happened at the site as the starting point for dialogue about where the issues it raises are alive today and to participate in addressing them."

The Coalition recalls a meeting organised by Nelson Mandela in 1987 between prominent Afrikaaners and leaders of the ANC that took place at the Slave House at Goree Island in Senegal. One of the organisers called it the "butterfly's wingbeat that precipitated the hurricane". Nelson Mandela later told Francois Mitterand that the haunting site of the African slave trade served as one of the keys that unlocked the door to new communication in the meeting, making his release and everything else possible.

Also addressing the launch was Louise Purbrick from the University of Brighton. Louise pointed out the international significance of the Long Kesh/Maze Prison that gave added momentum to the call for preservation.

She also pointed out that at a time when the British Home Secretary was detaining people in Belmarsh Prison without trial and contemplating the introduction of Diplock-type courts in England, a museum at Long Kesh offered important lessons about internment and the consequences of imprisonment under emergency legislation by non jury courts.

The Coiste proposal envisages preserving 5% of the Long Kesh site to include an H-Block, administration buildings and the hospital wing and to utilise a further 5% of space to build a campus for conflict resolution and dialogue.

The project is seen as inclusive and should incorporate everyone's experience, loyalist, republican, prison administration, families and victims. Coiste suggests that the project be placed in the hands of a stakeholders' committee.

Speaking at the launch, Director of Coiste Mike Richie said that he believed that the proposals were imaginative and inclusive and there will be plenty of room for other proposals.

"It would be a shame if we were to bury our past without retaining some of the site as a place of reflection and learning for students of all ages who have an interest in conflict resolution, prison history and its importance for political developments on the island.

"With a peace park dedicated to all who have suffered during the conflict and buildings dedicated to the key relationships which supported the conflict but are now committed to its resolution, we believe the Consultation panel will see the potential of our proposals as an innovative consensus-building project that could become an international landmark."