'Break up the Government not CIE' 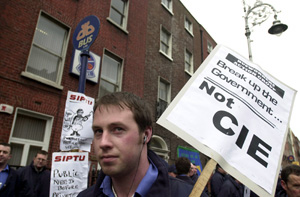 Public transport in the 26 Counties ground to halt this week as the condemnations from political parties and business organisations moved into gear. Monday's four-hour work stoppage, organised by the National Bus and Rail Workers' Union (NBRU) and SIPTU, brought thousands of Dublin Bus, DART, Iarnrod Éireann and Bus Éireann workers onto the streets. They were protesting at both the plans of Transport Minister Séamus Brennan to break up CIE while privatising bus services and also his failure to start negotiations with the CIE unions on his proposals, over a year after he first floated the break-up plan.

Bertie Ahern said he "could not understand the logic" of the strike, while Fine Gael's transport spokesperson Denis Naughten declared the stoppage "pointless" and a "disgrace".

"Pointless" was also the reaction of employers' group IBEC. Brendan McGinty, IBEC's Industrial Relations Director, said the public would be "less forgiving" for this action. It fell to Sinn Féin's Seán Crowe to be one of the lone voices in support of the CIE workers within Leinster House. Crowe said: "Minister Brennan's shambolic approach to transport policy has eroded any and all confidence the unions had in his ability to deal with them in a fair and above board manner."

Crowe accused Brennan of "constantly, and repeatedly" undermining "negotiations with the unions". The minister, according to Crowe, "clearly prefers to negotiate through the national media than with the workers".

Missing the point completely about the root cause of the stoppage were the Progressive Democrats. Their transport spokesperson, Tom Morrissey, declared that the unions had nothing to fear from privatisation.

While the unions oppose privatisation, they want the right to negotiate when, how and most importantly, if it will be implemented. This is what brought the CIE workers to strike this week.

Interesting in the political responses to the strike was the claim by Fine Gael's Denis Naughten that "the unions are interfering with a fundamental right - the right to travel on public transport". Denis doesn't seem to understand that, even if public transport is a right, there are some other and maybe more important fundamental rights at issue in this dispute.

February marked the beginning of the 16th month since Séamus Brennan first announced his intention to privatise 25% of Dublin Bus, followed up by the announcement nearly a year ago that he was breaking up both CIE and Aer Rianta.

According to NBRU General Secretary Liam Tobin, it then took another six months and a 'no fares day' protest last July to actually secure talks with Brennan's officials. When the talks started, the Transport Department officials asked for a further nine-week delay for consultation with other government departments on the issues.

Talks finally began last December against a public back drop where Brennan declared that he would carry out the break up and privatisation regardless of what transpired at the talks.

This led to the CIE unions balloting for strike action, which was called off after Brennan promised the unions he would meet them immediately. The unions met with Brennan on 26 January, nearly three weeks after his promise to meet "immediately" and it then took days for a written response to the unions' concerns that was promised within "24 hours".

It was these delays and the failure to appoint an independent chairperson for talks until after this week's strike action was called that prompted the work stoppages. Even now, it is clear that nothing has changed in Brennan's plans and he wants to steamroller his break-up proposals through no matter what.

Another angle overlooked in the privatisation proposals for Dublin Bus and Bus Éireann is who would run these services. The independent Irish-based bus operators fear that the privatisation will lead to transnational companies running the bus services here.

Part of the reason for this is one of scale. Taking up 25% of Dublin Bus would mean investing up to €70 million. Irish private sector operators want the services opened up on a route by route basis, where the cost of buses alone would be €2.5 million.

Two international transport companies who already have operations here are poised to bid for the 25% Dublin Bus market. One of them is a giant Singapore company DelGro Corporation, the world's fifth largest land transport company, who already run the Aerdart service in Dublin and London's Metroline service.

As to what are Séamus Brennan's thoughts on any of these issues, we don't know. Fifteen months on all we have seen is posturing and union bashing. What he has done is bring workers onto the streets protesting about the denial of basic workplace rights. Maybe that was his real agenda all along.

• Last - the position achieved by London Transport for traffic supply, reliability, comfort, safety and staff behaviour in the EU survey

• 1st & 2nd - the position achieved by Dublin Bus for comfort, traffic supply and staff behaviour respectively in the same survey.

• 50%- the number of provincial routes already run by private operators

• 25% - the proportion of Dublin Bus costs subsidised by government

• Lowest - where this subsidy ranks in comparison to other EU cities

• €54 million - the monetary value of this subsidy

• €49.4 million - the annual cost to Dublin Bus because of traffic congestion on city streets