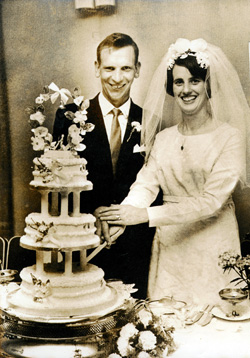 Patsy Kelly on his wedding day

The family of County Tyrone Councillor Patsy Kelly, abducted and killed in 1974, has spoken of their frustration after their legal challenge to compel the PSNI to allow an independent investigation into the circumstances of his killing was delayed for the fourth time at Belfast's High Court on Friday 13 February.

Judge Brian Kerr told the court he was adjourning the case brought by Kelly's widow Teresa until the British House of Lords delivers its verdict in a case involving IRA Volunteer Gervaise McKerr, who was killed in an RUC shoot-to-kill operation near Lurgan, County Armagh, in 1982.

The McKerr case was referred to the House of Lords after the Court of Appeal, in Belfast, ruled last year that the British Government failed to properly investigate the killing of McKerr and two other IRA Volunteers Seán Burns and Eugene Toman.

Paul Maguire, representing the PSNI, asked for the judicial review to be adjourned as it was likely that the outcome of the McKerr case could have a bearing.

"In the Kelly case, there is clearly material which suggests there may have been collusive activity on the part of the British forces," said Treacy.

Judge Kerr said he had sympathy with the family's wish for a judicial review, but said he would not be doing them any favours by pressing ahead with it.

The PSNI launched a new inquiry into the killing of Kelly last July after claims that he was abducted and shot by a UDR patrol and that the RUC deliberately botched the original investigation to keep the killers out of jail.

The Kelly family were told in November that case files relating to an investigation carried out in 1993 after media revelations about UDR involvement in the killing had been misplaced. The court was also told by the PSNI member leading the latest inquiry that the Kelly family had been misled when they were told the murder had been reinvestigated.

Patsy Kelly Jnr said that it looks like this case will take a long time to resolve.

"It is a sad reflection on our society that families like us have to take a road like this to find the truth about the murder of a loved one," he said. "We just want honest answers to our questions. There are so many. Who killed my father? Why did they do it? And who made sure the evidence was not found?".

Kelly added that given the history of the case, it was not surprising that they distrust this latest investigation.