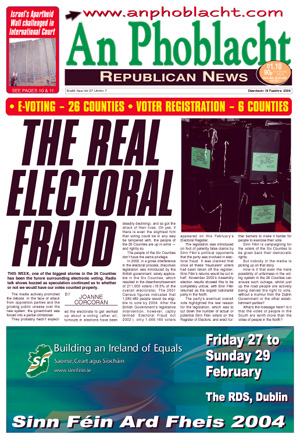 This week, one of the biggest stories in the 26 Counties has been the furore surrounding electronic voting. Radio talk shows buzzed as speculation continued as to whether or not we would have our votes counted properly.

The media actively promoted the debate. In the face of attack from opposition parties and the growing public unease over the new system, the government was forced into a partial climbdown.

They probably hadn't expected the electorate to get worked up about e-voting (after all, turnouts in elections have been steadily declining), and so got the shock of their lives. Oh yes, if there is even the slightest hint that voting could be in any way be tampered with, the people of the 26 Counties are up in arms - and rightly so.

The people of the Six Counties don't have the same privilege.

In 2002, in a gross interference in the electoral process, draconian legislation was introduced by the British Government, solely applicable in the Six Counties, which resulted in the disenfranchisement of 211,000 voters (16.5% of the overall electorate). The 2001 Census figures indicated that 1,280,480 people would be eligible to vote by 2004. After the British Government's legislative intervention, however, (aptly termed 'Electoral Fraud Act 2002'), only 1,069,160 voters appeared on this February's Electoral Register.

The legislation was introduced on foot of patently false claims by Sinn Féin's political opponents that the party was involved in electoral fraud. It was claimed that once all these 'fraudulent' voters had been taken off the register, Sinn Féin's returns would be cut in half. November 2003's Assembly election results showed this to be completely untrue, with Sinn Féin returned as the largest nationalist party in the North.

The party's overall vote was one in the eye for the architects of the legislation. It had been brought in, after all, to cut down the number of actual or potential Sinn Féin voters on the Register of Electors, and erect barriers to make it harder for people to exercise their vote.

Sinn Féin is campaigning for the voters of the Six Counties to be given back their democratic rights. But nobody in the media is picking up on that story.

How is it that even the mere possibility of unfairness in the voting system in the 26 Counties can arouse such outrage, whilst just up the road people are actively being denied the right to vote, without a murmur from the Dublin Government or the other establishment parties?