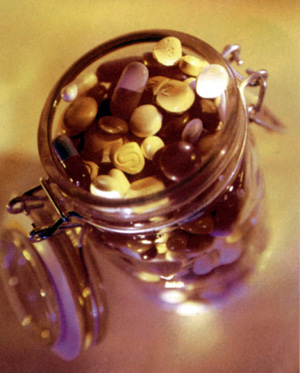 BY MICK DERRIG - Republicans have been focused for a long time on the havoc that illegal narcotics can wreak in areas of poverty and deprivation. I consider the real drug problem around cannabis or heroin to be the twin terrors of poverty and criminal prohibition.

However, there is a serious drug problem that disproportionately affects working-class people just as much as heroin or crack cocaine, yet we have never lifted a hand or written a letter about this business that destroys thousands of lives on this island every year.

That is because these problematic substances are totally legal.

I am not referring to our booze epidemic. No, these dangerous drugs which addict and kill Irish people are not only legal — they are respectable and handed out freely — very freely.

In fact, if you want to take the Derrig Drug Test, go along to a doctor, even one that doesn't know you from Adams. Tell the good doctor you are feeling a bit down about things — that your existence is not going to plan — took a wrong turn somewhere (Leeds fans won't have to pretend).

I would be surprised if you are not walking away with a script for drugs that can kill you, turn you suicidal, homicidal, or give you tardive dyskenesia (which is very similar to Parkinson's disease) if you take them for a long enough period. The list of side effects that would seem to be worse than any psychological malady or emotional turmoil you might find yourself in.

If you take them you will become part of the income of what has been called the "psycho-pharmaceutical complex". Like most things in this society, it is governed by the profit motive.

Therefore, the more people on these drugs and the higher the dosage, the better for the companies. They make sure that no one stands in their way — certainly not the qualified medical professionals we are taught to respect.

The largesse that drug companies shower onto everyone at the pushing end of this trade is a bigger corruption scandal than a thousand George Redmonds. The victims of this trade can be conned that they need to take this stuff forever — and on a high dosage.

Drug companies fund 'research' where the 'independent' psychiatrists and scientists find that, surprise, surprise, the drugs produced by the drug companies are wonderful, curing all in their path.

Actually, they don't use the word cure -- a non-medic expects an antibiotic to wipe out an infection. Well it does. It's real medicine. Psychotropic drugs don't cure — they "manage".

Lifetime maintenance regimes means profits for the life of the victim — sorry, patient. The drug companies' relationship to patients is completely analogous to the relationship of the tobacco companies to the dwindling numbers of smokers who will be standing in the rain outside pubs soon.

This highly immoral trade can only continue because it is legal and cloaked in the respectability of medicine.

Yet there is an alternative way. In Trieste in Northern Italy, there has been a system of hostels working since the early '70s. They work to the recovery model. It has been famously called a "Humane Shambles". People are free to sign themselves in or out as they see fit. The whole thing is run to minimise stigma and, crucially, to see what people are going through as a passing phase that could happen to any of us.

People do go on medication if they are admitted in a crisis, but the objective is to get them off meds as quickly as possible. That means looking at all the components of their lives, and, something psychiatrists don't get kickbacks for — listening to people in distress.

In the generation before psychiatric drugs made their appearance, most psychiatrists would have been psychotherapists as well. The "talking cure" as pioneered by Freud trying to assist people to gain insight into what demons plague them is all but a distant memory among most psychiatrists now.

Just in case you think that psychotropic drugs were the product of a great scientific inquiry to cure madness, it happened by accident in France in the '50s precisely because people who are mad are systematically stripped of their human rights. A pharmaceutical company was developing a drug to treat skin disorders like dermatitis. They phoned the local mental hospital to see if they could have some subjects to try this out on.

The manager duly obliged. The staff at the asylum noted in the succeeding weeks that the patients who had been given the new drugs became a bit quieter. Thus the great medical advance was hailed.

Psychiatric victims of that first generation of chlorpromazine now have Tardive Dyskenesia — it looks very much like Parkinson's disease — a case of the cure being worse than the malady.

What would have happened if these people had received no drugs? Well, we know the answer to that. They usually get better.

People go mad across the world — always have done, always will do. Some of it is the cruel hand of DNA, some of it the accumulation of childhood events or some adult trauma. In the 'developed world' your madness can consign you to a lifetime of medication. If you go mad in a place where they don't have the benefit of these wonderful healers, then after a while you generally get better. What people need is safety, love and reassurance to allow nature work its healing.

Where communities exist without psychiatry, communities often cure the mad — they certainly don't poison them for profit.

The scientific argument for the psycho-pharmaceutical approach is that there is a chemical imbalance in the brain. One of the best books written on the journey through depression to wellbeing to come out of this island is by radio presenter Gareth O'Callaghan.

Gareth starts his book with the startling revelation that the chirpy radio presenter that the public knows had been crippled with depression for years and that with everything seemingly to live for, he decided one day that he had enough of living.

He pulled back from that and went through the medical system of curing his depression. In the end — with the help of a great wife and fine friends — he cured himself. He is now a qualified psychotherapist, helping others.

He addressed things that medics - totally seduced by drug company propaganda — never consider. He ate a crap diet of fast food, he never exercised. The brain is physical — it depends on food. A fit body gives it a better blood supply and produces a healthier mind.

The drug company-sponsored psychiatrists never address the crucial area of diet. Why should they? There are no kickbacks down that road.

Besides, if people go down the road as advocated by Gareth, then they get off meds fairly quickly. The drug companies don't make such big profits.

Drug companies tell Orwellian lies about the effects of their products. It would take a series of articles to detail this entire sorry tale.

A brief example is the story of the current stable of "anti-depressants".

SSRI stands for Selective Serotonin Reuptake Inhibitor and the SSRIs are the current one-size-fits-all medical response to people being depressed. It is criminally easy to get a script for these things. There are currently six of them doing the rounds, the brand leader being Seroxat, produced by Glaxo-Kline.

Recently, they had to put a health warning on the packets that there are major problems coming off these things. People had reported real cold turkey horrors, with sensations akin to suffering electric shocks throughout their body. Do a Google search and key in 'Seroxat survivors' — I rest my case.

None of this is particularly new in the last 30 years. The old tricyclic anti-depressants, valium etc, were also hailed as being non-addictive cure-alls. It is now not seriously contested that drugs like valium, which were handed out like proverbial sweeties in Britain in the '60s and '70s, addicted millions of people.

Consider this, if these products did cure and were non-addictive, where would the ongoing profits be for the drug companies?

But there are signs of hope on the island. People do recover from mental ill health if given a chance by the system.

Slowly, over the last 20 years, they have started to band together to help others who are in a place where they have come from.

The Irish Advocacy Network — formed in Derry a few years ago — has gone from strength to strength because of the service they offer and their vision is desperately needed.

Quite simply, people sucked up into the psychiatric system need someone in there who is on their side. That person has walked in their shoes. No amount of academic training can replace that.

In Britain, where the Advocacy movement is more developed, the drug companies have offered their 'support'. Clearly, this support comes at a price and that is the cost of the network's independence to challenge a system that states as a given that once on meds, people should stay on them.

I hope that the Irish network of advocates realises this danger.

There is nothing inherently wrong with a short-term pharmacological intervention to stabilise someone who is suicidal or deluded. The issue we, as republicans, have to address is a system masquerading as medicine that is run purely and solely for profit and damn the consequences for the people who take this stuff.

This is an issue that has clear implications in the communities where we live, North and South.

Republicans have been to the fore in opposing illegal drug dealers.

We now, as republicans active in our communities, need to equip ourselves with the knowledge that will encourage a community response to mental ill-health that promotes recovery and does not provide an income to one of the most corrupt industries on the planet.

Any comrade who wishes to pursue this study further can do no better than read Dr Peter Breggin's excellent book, Toxic Psychiatry. Breggin, himself an eminent psychiatrist, is the classic whistleblower on a corrupt and corrupting system.

If you read nothing more on the subject, read this book.