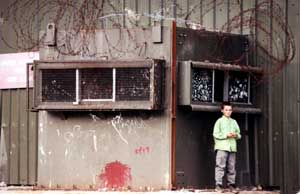 According to the study, the "nature of local deprivation is manifold" with many parts of the community heavily dependent on a range of welfare benefits, while suffering high levels of unemployment, low educational achievement and a poorer health status. A population profile of the area shows that West Belfast has the highest population, with a high proportion of young people and children, of all the city's partnership areas.

Despite the fact that West Belfast has a large pool of labour and local training organisations provide a variety of high-quality skills, the underdeveloped economic infrastructure has left the area beleaguered by unemployment and a job market characterised by low paid work.

Economic deprivation is underpinned by poor health. According to the statement of need, eleven of 13 wards fall within the top 10% of wards with the poorest health within the Six Counties. The death rate for men in West Belfast is 60% higher, and for women 43% higher than the Six-County average. The Whiterock, Falls and Upper Springfield areas are amongst the most health deprived areas within the Six Counties. The area also suffers from a higher than average suicide rate of 19 per 100,000. There are approximately 12,500 people in West Belfast receiving Disability Living Allowance, a rate of 15% of the population compared to the 9% disability average within the Six Counties.

Add to this the high number of people on the housing waiting list, the poor physical environment and lack of conservation areas and the real picture of deprivation in West Belfast begins to emerge. According to the document, in the last five years the housing waiting list in West Belfast has increased by 22% and the percentage of housing stress applications, primarily from people living in overcrowded conditions, has increased by 43%.

There are currently over 2,000 people awaiting housing, 1,500 of whom are classified as in immediate housing need. 40% of all overcrowded household applications are from West Belfast. A further indication of the level of poverty experienced in West Belfast is the high percentage, 51% of households who do not own a car, as is the high uptake in free school meals.

People from the Traveller Community endure even greater hardship with higher levels of poverty and ill health. Travellers are eight times more likely to live in overcrowded conditions and are often denied access to basic amenities such as running water, electricity and sanitation. Life expectancy amongst Travellers is around 20% lower than average with a mere 11% in paid employment.

There are an estimated 25,000 former political prisoners in Ireland, with West Belfast home to around 6,000. Despite the current peace process, republican ex prisoners continue to experience high levels of unemployment and employment in low paid and insecure jobs.

Commenting on the publication of the study, Una Gillespie of the West Belfast Economic Forum said that the basic statistics on poverty and deprivation in West Belfast have not changed. "Despite decades of fair employment legislation, TSN, Equality Duty and other initiatives, deprivation and poverty still remains to be addressed. The real issue is equality and human rights and the need for substantial long term resources if we are to see a major impact on these statistics," she said.

"To the many people who live in West Belfast, these truths are a self evident part of their daily lives. In recent years, however, there have been those, some in political office, who have sought to belie the continuing impact of discrimination and in doing so marginalise this community's struggle to achieve equality and equity. Clearly, it is essential to set the record straight."