Battling to save people's votes 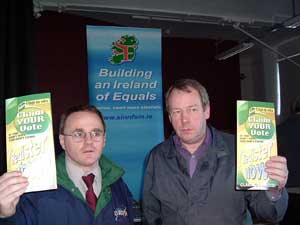 "The new Electoral Fraud Act has served to disenfranchise more nationalists than the infamous era of gerrymandering", according to Sinn Féin Councillor Seán Begley, a member of the party's Six-County Electoral Directorate.

Speaking before the party's Cúige AGM last Saturday, Begley reminded party activists that nearly 200,000 potential voters were excluded from last year's electoral register, and urged the party to remain focused on the future registration needs of the public.

The Electoral Fraud Act was introduced to combat claims by various political parties of voter impersonation — assertions which were also a spurious attempt to explain the continuing rise in the Sinn Féin vote. Despite admissions by the Electoral Office that "there are no statistics to support these widely held perceptions" and "few, if any, successful prosecutions", the legislation was still introduced in May 2002.

The ensuing bureaucratic confusion led to more than 130,000 potential voters excluded from the register.

Census figures, released by the Government Research and Statistics Agency, (NISRA) also showed that an additional 57,683 eligible voters across the North, did not appear on the register either.

The Electoral Fraud Act is unique to the Six Counties and the legislation is not in use in any other Westminster constituency.

Begley reminded Sinn Féin representatives of the more than 100,000 entire households omitted from the Register, and pointed out that thousands of additional voters who required rolling registration forms also ended up being excluded from the list.

"The unavailability of rolling registration forms meant lists of people requiring forms had to be forwarded to the Electoral Office, who in turn had not sufficient resources to deal with the lists," said Begley. "As a result rolling registration was cumbersome and difficult."

"A further difficulty was that many people were called to electoral courts after their form had been returned to the Electoral Office. Only a very small percentage attended the court, which meant the remainder were not included on the register."

The number of young people and first-time voters in the recent election also dropped by 50-80% from previous figures, and it has been revealed that people living in areas of deprivation or rural communities were also neglected or even excluded from the registration process.

Sinn Féin had complained to senior electoral officials about both the legislation and the failings of practical arrangements leading up to the recent election. The party has continued to express its concerns during a series of recent meetings with the Electoral Office and Electoral Commission.

The Electoral Commission — which oversees the running of elections — also held a one-day review of the Assembly elections. The review was attended by representatives of several political parties, the Chief Electoral Office, and the Commission itself.

Sinn Féin's Assembly leader Conor Murphy called on the Electoral Commission to "restore public confidence in a process which has, since the initiation of the new legislation by the SDLP and unionists, been badly damaged.

By the completion of the meetings there was an agreement that the present legislation was not acceptable and needs amending. Over the past week the Electoral Office has also agreed to make rolling registration forms available online, which Sinn Féin hopes will help facilitate an efficient and simple rolling registration campaign in future.

The party plans to continue to lobby for amendments to the Electoral Fraud Act during ongoing political reviews over the next month.

"It is our view," said Sinn Féin Chairperson Mitchel McLaughlin, "that every effort must be made to ensure that this experience is not repeated come the European Parliamentary election in June.

"Every influence must be used to ensure that the difficulties that led to the disenfranchisement of so many people are thoroughly addressed well in advance of the next election."