McCreevy's charter for the wealthy 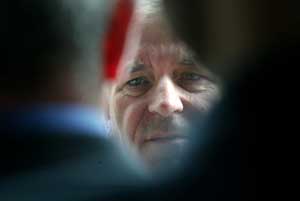 Seventy is not usually an important number but last week it was the amount of measures published in Charlie McCreevy's seventh Finance Bill. Only three of the provisions deal with tax avoidance or evasion.

The new bill means more workers on the higher rates of income tax, with unfulfilled promises to take the low paid out of the tax net, along with a stunning array of new or extended tax breaks for builders, holiday home developers and business in general.

Finance Minister Charlie McCreevy doesn't see it this way. He described the priorities of his new bill as "measures to support our ability to sustain and expand employment". Not so, said Sinn Féin's finance spokesperson Caoimhghín Ó Caoláin, who said the new bill was a "charter for inequality". Ó Caoláin described McCreevy as "a Minister who prioritises housing for horses at Punchestown over housing for people in a Government which has cut back rent allowance for those in need".

Ó Caoláin also made the point that the bill "implements a budget that puts more ordinary workers in the top tax bracket. It fails to deliver real tax reform and fails to require the highest earners to pay their fair share".

So what was actually in the 70 measures that McCreevy told journalists would "foster an environment which will stimulate investment and provide more jobs"? There is, it seems, a chasm between Sinn Féin's understanding of the bill and that of the minister.

The bill starts off with some small measures such as tax relief for trade union subscriptions, up from €130 to €200 annually and exemption from income tax for approved households in Gaeltacht areas providing accommodation to students studying Irish.

The real meat begins in the section dealing with capital allowances and tax incentive schemes. Tax reliefs for builders of hotels and holidays camps was due to run out at the end of this year; now McCreevy has extended the reliefs until the end of 2006. The same extension is given to investment in holiday homes.

In fact, 2006 is the key year in McCreevy's plans. Maybe it is wrong to wonder if this might just be the next date for Leinster House elections, or that McCreevy and the Fianna Fáil/Progressive Democrat coalition were with this bill ensuring that the complex series of tax reliefs and allowances built up under this and previous governments will be unreformed for the lifetime of the present Government.

Also benefiting from a 2006 tax relief extension are developers building multi-storey car parks or availing of rural and urban renewal schemes and Business Expansion Schemes. Some of these schemes, such as rural renewal, have had positive effects in the local communities in which they were sited.

What we don't know is how effective across the 26 Counties these schemes were, and more importantly, who has been benefiting from them. Urban renewal has transformed cities and towns in Ireland with little or no review of whether the net result was the most desirable for those who live and work in these towns, not just those who build and develop for quite substantial tax deductible profit.

One belated and positive measure is the introduction of tax credits for businesses that invest in research and development. It is worth noting though that this is another tax break for businesses that pay corporation tax at 12.5%, far less than the 20% and 42% rates paid by most workers.

The thinking behind low tax rates for business would be that tax cuts on profits would lead to increased investment by business. You could draw the conclusion that Irish business has been pocketing their profits and running to offshore banking operations with the cash. Remember that a KPMG report late last year found over €4 billion taken out of the Irish economy to the Isle of Man alone between 1998 and 1999.

But this new tax credit puts it up to Irish business that there can be no excuse and no remaining impediments investing in Research and Development.

The most bizarre double standard in McCreevy's bill is the provisions for "Headquarters and Holding Companies". These are aimed at getting more multinationals to site their regional headquarters and holding companies here. It offers generous tax write offs and get out clauses for transnational companies who take up the scheme.

The provisions must have raised a cheer in the International Financial Services Centre on Dublin's dockside, for there will no doubt be lots of well rewarded contracts for the companies shielded inside the smoked glass covered palatial office blocks. It is they who will administer the complex series of transactions and company formations that will allow these companies cash in.

The provisions will help, we are told, the IDA attract international investment and in McCreevy's world this is always a good thing no matter what the consequences. It makes you wonder what are the chances of an Irish Enron before the end of the decade?

One provision to be welcomed is the exemption of stamp duty on intellectual property; this will create a better environment for research and development by business. It touches, however, on another important point.

Why are we building this enterprise economy? Well, the usual answer from government is to create jobs, etc, so we all can have a better quality of life. Well, one of the consequences of tax exemptions in all these areas is that someone somewhere must pay tax to keep all the vital public services we need funded and working. For government today, this means nice simple earners like stamp duty and one group not exempt from this tax are house purchasers, who not only have to pay hugely inflated prices to buy houses, they also have to give the government a substantial tax kickback also.

This is the nub of the problem. Someone has to pay tax and it is clear from this year's finance bill it will not be the business community or the wealthy in Irish society. They will still have their schemes, allowances and reliefs.

The rest of us will be paying tax and footing the bill, not just for running public services, but to help subsidise the lifestyles of Ireland's wealthy. For McCreevy, it's another year of business as usual.