Rotten to the core 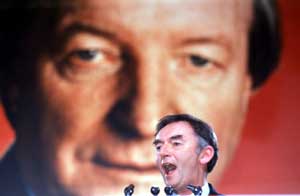 The latest revelations about former Fianna Fáil Minister Pádraig Flynn and his daughter Beverly underline once again that politics in the 26 Counties is fundamentally corrupt.

Evidence before the Mahon tribunal from property developer Tom Gilmartin alleges that not only did Flynn receive a £50,000 cheque from the developer, but that his daughter Beverley, a sitting Fianna Fáil TD, allegedly helped him to stash the money in an illegal offshore account.

Three senior cabinet members in 1989, Haughey, Burke and Flynn, are now known to have accepted large sums from businessmen for their private use, and to have evaded tax.

Questions continue to surround the role of the Taoiseach, Bertie Ahern, at this time. Gilmartin insists Ahern attended at a meeting between himself and several government Ministers, including Haughey and Burke, to discuss his plans for developments in Dublin, after which Gilmartin was asked to deposit a massive sum in a secret Isle of Man account. Former Minister Mary O'Rourke, who briefly entered the room in which the meeting was held, now backs up Gilmartin's version of events.

A certain scandal fatigue has overtaken the Irish public in recent years. We have become so used to revelations of corruption, tax evasion and suspect dealing among politicians and business figures that we are in danger of losing our sense of outrage. It is with little anger, and scarcely any surprise, that we hear of yet another politician who has broken the law, or abused their position.

Partly this is due to the nature of the tribunals set up to investigate corruption. Their proceedings are slow and cumbersome; the result is a drip-feed of revelations over a period of years, while the events in question recede ever further into the past. Partly it is because there have been too many scandals. When I was a teenager, the papers were full of stories about a "golden circle" of businessmen in receipt of favours from Fianna Fáil. Every year since has brought some further scandal.

We have lived so long with corruption, we have become familiar, almost comfortable with it. Bent politicians have become a joke. When I became a member of Sinn Féin one of my friends laughingly told me I should have joined a party where I'd have got handed brown envelopes.

Corruption is not a victimless crime. Its victims lie on trolleys in the corridors of hospitals bled white by cutbacks while the political elite evaded tax and secreted millions overseas. They are in damp and rat-infested schools, the legacy of decades of under-investment and neglect. They are in sprawling housing estates without proper infrastructure or adequate services, legacies of a corrupted planning system that will remain with us for decades to come.

Nor is corruption ancient history, an aberration that belonged exclusively to the Haughey years. In times of trouble, traditional societies sometimes chose a scapegoat — a single individual who was chosen to bear the guilt of the whole community, and put to death to expiate their sins. Charles Haughey is now being used as a scapegoat for Fianna Fáil and for Irish politics. But corrupt as he undoubtedly was, corruption did not begin under Haughey and it did not end with his departure from office.

Fianna Fáil is a tainted party, and politics in the 26 Counties is a tainted business. That taint cannot be rubbed out by a simple change of personnel. It is not just a case of a few bad apples. The whole barrel is rotten and stinking.

Corruption is integral to 26-County politics. Ours is a political system with clientelism as its foundation, in which favours are the currency of political power, where the personal qualities and political beliefs of a candidate for public office play second fiddle to their ability to act as a fixer for their constituents. In theory, a TD is meant to deliberate and vote on laws for the benefit of all. In practice, they are usually a combination of ombudsman, citizens' advice bureau, and messenger-boy for their constituency.

Glimpses into this political culture occasionally surface. As a Minister in the last coalition, Bobby Molloy made representations to a fellow member of the government on behalf of a man convicted of raping his own daughter. The Taoiseach recently intervened in a planning matter in response to the prompting of a constituent. Plainly, neither man paused to think whether his intervention was right or wrong. A constituent was making a request to them, and this was all that mattered.

This kind of clientalism is not only amoral, but profoundly dishonest. Both Bobby Molloy and Bertie Ahern, in making their respective interventions, undoubtedly knew these would not make a blind bit of difference to the decisions of the public servants they lobbied. But what was the chance of them telling their constituents that (a) it was not proper for them to intervene in these circumstances, and (b) in any case, their intervention would have no effect? That's not how Irish politics works.

So what happens when the constituent is not Mrs Murphy, wondering if she could get bumped up the housing list, but a wealthy businessman with a chequebook under his arm? Receiving political donations in return for favours is only a logical step up from doing favours in return for votes. And if some of the donation ends up in the politician's back pocket, to be spent on a luxury yacht or dinner at Le Coq Hardi instead of leaflets and posters, who's going to notice?

Big business and politics enjoy an unhealthily close relationship in many countries. Businessmen may claim they give money to political parties out of a disinterested concern for democracy, but what they are really doing is buying access — paying for the opportunity to meet with and bend the ears of the most powerful people in the land. This alone gives them an influence over public policy the ordinary voter can only dream of. When this relationship is combined, as it is in Ireland, with a clientalist political system, corruption is the natural and inevitable consequence.

This situation is exacerbated by politics in the 26 Counties being mainly a profession — one largely confined to a narrow elite. Sons and daughters inherit "family" seats from fathers, uncles and cousins. A majority of TDs in the establishment parties come from "political" families. A deputy motivated to enter politics by deeply-held principle or a desire to change society for the better is a distinct rarity. Small wonder if politics has become a breeding ground for corruption.

A clientalist system, a closed political class, an unhealthy relationship between politics and business — these are some of the reasons why corruption is integral, not accidental, to 26-County politics. But at the bottom of all is the absolute moral bankruptcy of the business and political elite.

These are people with a gaping hole where others keep their conscience; a group so bloated with arrogance, they imagine they do not walk the same earth as the rest of us, breathe the same air, or owe obedience to the same laws. Like Haughey, who told the country to tighten its belt, then sipped champagne while hospital wards were closed, they preach "wage restraint" for workers while squandering millions on private jets and strings of racehorses for themselves. Their arrogance and conceit are summed up in Denis O'Brien — a man who, having made millions out of this country, moved abroad to avoid paying tax, and now calls Ireland a "communist state" because some of us dare question the actions of our business and political masters.

The court of King Bertie and his tawdry train of gombeens, incompetents and crooks is as rotten as that of Louis XVI and Marie-Antoinette. Our contemporary aristocracy, the political fixers and the well-heeled alumni of Blackrock and Clongowes, are as arrogant and amoral as any titled fool of the past. Now, where are the tumbrils*?