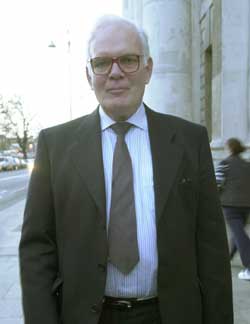 Speaking during statements on the Mahon Tribunal on Tuesday, Sinn Féin Dáil leader Caoimhghín Ó Caoláin described the controversy surrounding the €50,000 cheque received by former Government Minister Padraig Flynn from property developer Tom Gilmartin as another reminder of the "sleaze and corruption" into which politics in this State have been dragged.

The Sinn Féin TD pointed out that in his opening remarks on Statements on the Gilmartin Controversy in January 1999, the Taoiseach, referring to the relationship between planning decisions and big business, said: "The people are entitled to the assurance that the public interest is paramount at all times and that such decisions are taken on legitimate grounds, having regard to employment, effects on the environment and other relevant considerations."

"Five years later, in this short debate that has been grudgingly acceded to by Government, we have yet another reminder of the depths of sleaze and corruption into which members of establishment parties have dragged politics for decades," said Ó Caoláin.

"It is not just the activities of one or two individuals that have fuelled public cynicism about politics but a culture of greed and self interest that ranges from political careerism to full-blown corruption, selling political influences and favours for money. I acknowledge that everyone is not at it but such a culture has been facilitated by the close relationship between big business and Fianna Fáil, in particular, over many years.

"That relationship continues to flourish, and we have only to look at the Government's disastrous housing policy to see how it does so. Let us consider the consequences for the people for whom the Taoiseach expressed concern just five years ago. Property speculators and landlords are rewarded as land and house prices soar, fuelled by a housing shortage that this government has failed to address through any direct State intervention.

"Legally and above board, but also immorally, government policy fills the pockets of those who donate to Fianna Fáil. This does not require individual corruption on the part of individual Ministers, but it requires and represents a collective corruption of politics, when government is conducted on behalf of vested interests, and where the wealthiest in our society can be certain that their interests will be served by government first.

"Five years on, let us look at the tax breaks which last week the Minister for Finance renewed for this particular sector in Irish society up to the year 2006. That is the real background, not the accusations thrown at individual ministers.

"A corruption of politics forms the background to this debate. The Government is fooling itself if it thinks for a moment that the public is not aware of that. Speaking at the World Economic Forum in Davos at the end of last month, the Taoiseach warned Sinn Féin in a very clear statement to stay quiet on issues of corruption. The party has no intention of doing so."