United Ireland starts in your community 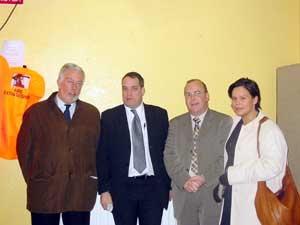 But there's another sense in which this is not true at all. Whether you get a job, a house, admission to hospital and so on, is not determined at local level at all. It's determined by government, which runs an economic system based on inequality: government which is neither accountable, nor committed to implement human rights, but rather government that governs on the basis of favours and discrimination — in a word — government by discriminatory and corrupt practices.

This is the context of local government.

Far from realising grandiose aspirations of local democracy, whereby local authorities might control local governance on a range of local issues, such as housing, health and waste, in fact local authorities, all in the name of local democracy, only implement government policy. This enables local elected politicians to be used as scapegoats, to take the blame for the fact that hospitals haven't a bed for you, that there aren't houses for over 100,000 people, that roads are in an unfit state, or that there is no clean drinkable water in the tap. But these are things about which local councillors can do little if anything.

Councillors are tortured day and night with requests by local people. It is the prevalent culture of dependence, against the common background of corruption, favours, and patronage, where it is often the case that the only way to get a house, or a bed for your dying relative in hospital, is to see your councillor, or even your TD. You would need a heart of stone not to try to get these 'clients' their rights, to end the abuse of people who are most often in desperate need.

Is that what councillors are elected to do?

As Connolly once said, if revolutionaries could take power through elections, then governments would ban elections.

How else could it be that people in Ireland would accept casualty wards unable to accommodate people, ever lengthening list of homeless, or schools where 'subscriptions' to school costs are the norm, and 'grinds' and a fat bank book the essential passport to college. How do we change this when the culture of dependence is so prevalent that people may not vote for you again, unless you meet their expectations and their most just demands?

And yet there are instances where individual councillors have transcended institutionalisation and have worked to advance the agenda of building a new Ireland, have successfully challenged Dublin and London government policies.

For example, councillors have used their elected position to engage their local communities to build participative fora at a local level. Councillors have challenged those nominated by the executive to join the Strategic Policy Committees — the consultative bodies that Environment Minister Noel Dempsey set up in his 'reform' of local government, but which become so easily occasional talking shops, without power or impact.

Similarly in the Six Counties, there is provision in the Local Government Act to set up working groups bringing together the community and the NGOs, the people who work at the coal face of deprivation, who know the full denials of rights by government, to bring the people into participation

How else are we to realise the exciting ideas, some of which are even embodied in the GFA, for instance for a consultative civic forum to play a part in governance, if we do not begin to engage the community, to evolve methods to achieve participative grassroots engagement, unless we start, at local level. We must engage in a transparent and accountable way, draw in the community and voluntary sector and trade unionists into local governance - the very people who as a community have been denied their rights.

Other councillors have issued Compulsory Purchase Orders on derelict buildings; have taxed derelict sites; have forced the council to build social housing in their place; have accrued funds to the council by imposing huge levies on developers for the amenities that make new housing so attractive and remunerative to the developers. They have raised loans to fund local community development, like locally-owned wind power, run by the community themselves, where 'profits' go back into the community to be employed as the community decides. Councillors have clawed back the Eircom funding set aside for broadband in the underdeveloped areas of the West and have taken charge of bringing broadband out to outlying areas.

Not so. Councillors in the North have power to set rates, to set up council working groups, to engage local people, to contest rights, to impose equality imperatives on suppliers, on the employment policies of councils, on the distribution of funds to different communities. But these are powers that need to be negotiated through strategic alliances, and implemented towards engaging people in the project of building a new Ireland.

Together, councillors in the Six and 26 Counties have the opportunities to build regionally around the border, to work cross-community, cross-border, and to expand this work to wider regions, the counties beyond the immediate border, which also have suffered from partition.

They have opportunities to draw down EU funding programmes to address deprivation in the border regions and beyond, and make the border the irrelevance it must shortly become, and to address the deprivation and denial of equal rights their communities have endured.

These steps are ways of beginning to implement the charter of human rights that Sinn Féin recently launched for consultation across Ireland. It is a way of engaging people in the project of building a new Ireland based on the vindication of human rights and an end to discrimination.

Effective work as local councillors is about building this community, about engaging people, through local struggles against the denial of housing, of hospital care, of free education for all. It is about building a community for a New Ireland, where rights are implemented, where people in their communities will secure economic development on a community-controlled 'profit' basis, and they will begin to secure a voice in the governance of their new Ireland. This empowerment will not drop from the sky, it must be built and nurtured. The only place to start is at local level.

Clientelism will get us nowhere. Agitation round rights, building participation, engaging people in a community, is work for an Ireland of equals. An All Ireland is coming - that is for sure, no matter how the Brits and Dublin may stall and prevaricate.

But will it be a 32-County Free State, with councillors forever chasing to pick up the effects of their bad, unequal and corrupt central government? Or will it be driving to empower people and establish a government of equals in a united Ireland?

In this sense all politics is local. It is at the local level that people need to be empowered to engage with bringing about an Ireland of equals.