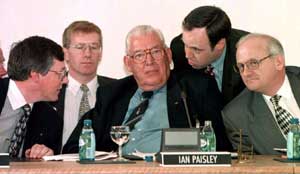 The DUP's devolution proposals mark an important shift in as much as they are "a shift by that party from the never-never-land politics they have inhabited for decades," Sinn Féin's Chief Negotiator Martin McGuinness told the party's Six-County Cuige AGM in Belfast this week.

McGuinness said the DUP had recognised "that power-sharing is the way forward" and that this brought the party "into the ballpark of the Good Friday Agreement politics".

He challenged the DUP to talk directly to his party rather than use the conduit of the British Government, a government that they have for years been denouncing as treacherous and dishonest.

Meanwhile, Sinn Féin sources were putting a less favourable spin on the DUP's position. "I don't think anybody believes they are going to engage — not even the two governments," a party member told the Sunday Business Post.

Sadlye a mesmerised rabbit caught in the DUP's headlights, he might be able to secure the tens of thousands of unionist voters who supported the GFA but who have failed to subsequently vote for the UUP.

Instead of presenting an alternative voice, a voice a significant section of unionism is clearly eager and willing to hear, he allowed a fundamentalist agenda to dominate the unionist discourse and in doing so systematically corroded his own power base. And now his only complaint against the DUP's fundamentalist vision is that it isn't fundamentalist enough.

Meanwhile, in the Irish News, columnist James Kelly was bewailing "the fickle hand of fate" and "our unfortunate history" which, according to Kelly, has dealt northern nationalists the double blow of losing the guiding hand of John Hume at a time when Ian Paisley, "the guldering rowdy — who disgraced us at Oxford, Westminster and Strasbourg" has "emerged on top of th and equality over their heads, then they'd engage."

At the core of the current crisis is not unionist regrouping around reactionary rejectionism, although this plays its part, but the British Government's strategy of only moving forward as slowly as unionism allows.

Meanwhile, another game of smoke and mirrors was being played out in the media, with the Sunday tabloids devoting frontpage banner headlines and in-depth analysis of the continuing Stakeknife saga.

It is surely no coincidence that, just three days earlier, the relatives of a hundred victims of British collusion with loyalist death squads had travelled to London to picket the MoD, MI5 and the British Tory party. The cornerstone of their collusion story is the way in which the British state reorganised and rearmed unionist paramilitaries as a mechanism to commission the murder of citizens within its own jurisdiction.

It would be impossible to overemphasise the damaging natst thieves.

This scenario obscures the British state's primary relationship with unionist paramilitaries. It obscures the fact that the targets of Britain's collusion strategy were not simply IRA Volunteers but all those who posed a threat to British rule, politically, (members of Sinn Féin) judicially (Pat Finucane and Rosemary Nelson) and those who simply got in the way.

Less prominent in the media was the dramatic development last Thursday when the substantiate allegations of the so-called 'Stormont spy ring' were dropped. In October 2002, the British Government, imposing legislation outside the terms of the Agreement, suspended the political institutions on the pretext of IRA spying at the heart of government.

The fact that the suspension followed a meeting of the UUP ruling council at which the party adopted the anti-Agreement agenda of the DUP was far from incidental, as republicans pointed out at the time. The spy ring allegation from the NIO has been withdrawn without explanation," said Kearney.

"The Special Branch fantasy of a Stormont spy ring is finally disproved. The clock cannot be turned back. My family has been victimised and the political process has been damaged. Special Branch carry the blame for that. They have not yet been made accountable for that act of political subversion."