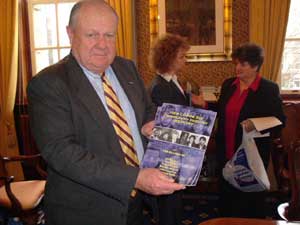 International lawyer Ed Lynch and New York Supreme Court Judge Patrick Henry were among a host of dignitaries, campaigners, and political figures who gathered alongside the families of the New Lodge Six in Belfast City Hall this Wednesday to announce the launch of a petition to the United Nations Special Rapporteur on Summary and Arbitrary Execution with respect of the 1973 massacre.

The petition — gathered with the assistance of human rights group Relatives for Justice, the New Lodge Six Committee, and US legal representative Ed Lynch — comes after the failure of the British Government to act on any of the findings or recommendations of the November 2002 community inquiry into the killings.

"Last year, on the 30th anniversary of the massacre of the New Lodge Six, the local community held its own citizens' inquiry with a distinguished panel of international and domestic jurists who had expertise in the field of human rights, domestic and international law," explains New Lodge Six Committee Chairperson Paul O'Neill.

"The British Government and the British Army were also asked to participate and provide evidence to the inquiry. Their response was one of contempt and even insult.

"The inquiry found that all six men had been unlawfully killed and that the investigative procedures in terms of uncovering all of the facts had failed to thoroughly examine the killings and hold accountable those responsible. Additionally, these failings were in violation of international standards of investigative procedures.

"The community inquiry also called on the British Government to set up a public inquiry with the authority to subpoena and seek disclosure of relevant material.

"However, the state has failed to positively respond to, or to engage with, the families and their legal representatives and it is in this context that the families now seek to petition the United Nations Special Rappatour on summary or arbitrary executions."

The New Lodge Six were unarmed men gunned down by the British Army and its agents without provocation or warning in the New Lodge Road area of North Belfast in early February of 1973.

After their deaths, the British Army and media orchestrated a public smear campaign to discredit the dead and their families, claiming those who had been shot had been gunmen engaged in a fierce battle with state forces.

Since then, despite reams of evidence to the contrary, the British Government, the NIO, and the British Army continue to refuse to clear the names of the men killed, acknowledge the State's responsibility for the deaths, or offer any explanation as to why the men died.

Belfast Lord Mayor Martin Morgan, who hosted the petition launch, called the killings a "grave injustice in our midst".

"Thirty-one years ago last week, six men were murdered in the New Lodge area," said Morgan, "We have six victims and we have families who have yet to achieve justice for their relatives. As long as that is maintained, I believe that we cannot achieve a fully inclusive, just society.

"At a time when the focus is on people's human rights, clearly these men's human rights were breached in the most extreme manner. They were murdered, and the Government has to call for and provide an inquiry that is transparent and accountable to find the true reasons as to why these men were killed and who killed them."

US lawyer Ed Lynch pointed out that the petition had been "years in the making" and paid tribute to the families of the New Lodge Six for their courage and determination.

"The search for justice is not a speedy thing," Lynch told those assembled, "and it often starts out with a few families realising that injustice was done and that ultimately the truth must come out.

"The reason we are here today — in 2004 — is that the British Government have done nothing. They have defaulted.

"They received an extensive report, signed by the international panel, giving chapter and verse of a basic violation of human rights — namely the killing of unarmed civilians by members of the British Army."

"The response of the British government, under the leadership of Tony Blair, has been to do nothing. Therefore the families and the New Lodge Six Committee have decided to petition the United Nations and we are calling upon the British Government to respond to this petition.

"Britain signed the United Nations charter, and the Rapporteur has a mandate to investigate and report to the United Nations Human Rights Commission on deaths owing to the use of force by security forces of the state — exactly what happened here.

"There has also been a breach of the obligation to investigate alleged violations of the right to life and to bring those responsible to justice - because somewhere out there, there are soldiers and commanders who have deliberately killed innocent British and Irish citizens and they have not been brought to justice."

Sinn Féin's Gerry Kelly, who has been involved with the New Lodge Six campaign from the outset, said he welcomed the fact that the campaign had now been given added momentum and international exposure.

"I welcome the involvement of people like Ed Lynch, Judge Patrick Henry and others in highlighting the case and bringing it to the attention of the UN Special Rapporteur," said Kelly.

"This is not hard. If the British Government made a decision tomorrow to sort this out, it would be sorted out very, very quickly and without the massive expense that everybody claims these inquiries generate. The community held a very effective inquiry last year. It didn't cost a vast amount of money. The British Government could do the same."

"Thirty-one years later, people do not understand the reluctance of a government which was obviously was not in power at the time, to conduct a transparent examination of what happened and why.

"These families deserve justice. Individuals involved in collusion issues and state killings each have their own private views of what closure means, but what is central to all of us is the truth."

The families and friends of those who died that night in 1973 want the British Government to state why they instructed soldiers to kill unarmed civilians.

They want to see those who directed the killings prosecuted, and hope that one day the government might even issue a public apology for the deaths of their loved ones and the defamation of their characters.

They have pledged to continue to fight for exactly that.