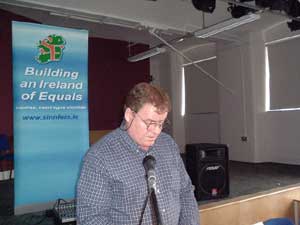 "We need to analyse, organise and act if we are to succeed in building a party capable of carrying this struggle forward. We need to develop new thinking, create new methods and crucially we need to advance, particularly in the present political climate, our All-Ireland Agenda."

These were the words of former POW Harry Maguire concluding his address to party activists at the AGM of Comhairle na Sé Chondae in Conway Mill, Belfast on Saturday 7 February.

The theme of the AGM was party building and Maguire delivered a paper on the topic to a hall packed with activists from across the Six Counties.

Broken down into three headings, Building Political Strength, Electoralism and Negotiations, Maguire's paper asserted that republicans need to analyse the past ten years of struggle as a specific phase defined by the lead up to and the announcement of the IRA cessation of military operations in 1994.

"We must focus on party and community building throughout the island of Ireland. We must create an activist base, which is politically motivated towards pushing the republican agenda from street level up," he said.

"In the past republicans were politicised by the environment they worked or lived in and fed off the dynamics of conflict. That is changing and we must now develop our own dynamics to train, support and politicise activists capable of carrying forward the republican struggle.

Cora Groogan, representing Ógra, added a further dimension to the theme of party building when she focused on the need for Sinn Féin to ensure that more women and young people be brought into the party.

Groogan added that the party needs to ensure that new members are integrated fully into the party and given positive roles and work to carry out.

The meeting then broke up into workshops before coming back to address the issues in a plenary session chaired by Bairbre de Brún, the party's candidate for the Six Counties in June's European Parliamentary elections.

Earlier in the day, elections were held for the Cúige officer board and the delegates to the Ard Chomhairle.

Declan Kearney was re-elected as chair with Paud Devenny elected as vice-chair.

Former POW Bronwyn McGahon was elected as treasurer and Newry man Brian Tumelty was also elected to the officer board.

The three Ard Chomhairle delegates elected by the body of the hall were Seán Lynch from Fermanagh, Derry woman Phil Coyle and Tyrone woman Doris Vincent from Coalisland.

"This gives the Cúige a good geographical spread," Declan Kearney told An Phoblacht. "The coming year presents itself as one of strategic opportunity for our party nationally and particularly in the Six Counties."

Kearney then highlighted the challenge for Sinn Féin in June's European election. "The entire complexion of the forthcoming European election contest has now decisively changed," he said. "This Cúige can undoubtedly elect an MEP from the Six Counties. If another Assembly election is announced for the same day as the European contest, our Cúige can take the extra seats we missed out on by slim margins in November.

"2004 and the likely political conditions arising make this coming period not only pregnant with opportunity to advance systematic campaigns on equality and human rights, anti-collusion and the all-Ireland agenda, but these also unpack as strategic requirements for the Cúige.

"Against an organisational backdrop of focused party building, let's ensure Cuige na Sé Chondae shoulders its responsibility to the rest of the struggle by punching our revolutionary weight and more this year."