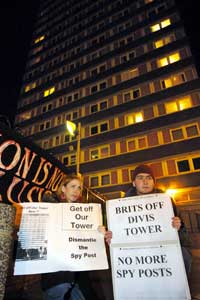 Around 100 people took part in a protest outside Divis Tower in West Belfast on Saturday 10 January to highlight the issue of state collusion in the killing of nationalists and to calling for the demilitarisation of the British Army spy posts situated on top of the Tower Block.

Newly-elected West Belfast Sinn Fein Assembly member Fra McCann joined residents at a camp out organised by Ógra Shinn Féin on Friday night 9 January and added his voice to the calls for the immediate removal of the spy posts.