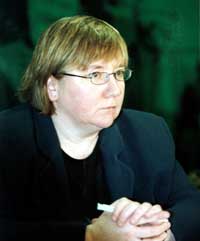 The NIO has been accused of operating a "no Irish need apply" policy after it emerged that people from the 26 Counties are still being excluded from senior civil servant positions in the Six Counties.

It was revealed that applicants born in the South were recently rejected for posts as chief economists in three civil service departments due to their nationality, and that overall, current senior civil service recruitment practices also impede the employment of women and Catholics.

A spokesperson from the Department of Finance and Personnel has confirmed that people from the 26 Counties were barred from holding senior positions within the civil service in the North, stating: "UK law makes it unavoidable that nationality restrictions are applied to employment in the civil service.

"The precise form the restrictions take is also determined by EC law on freedom of movement of workers. The result is that certain posts in the public service are reserved for people with British citizenship, while other posts are open also to EC and Commonwealth citizens."

The spokesperson added that the ban applied to all civil service departments in the Six Counties.

"It's disgraceful," says Sinn Féin's Dara O'Hagan. "This has been a long-running issue and Sinn Féin has raised it on a number of occasions. Yet more than five years after the signing of the Good Friday Agreement, Irish nationals are still being discriminated against."

The senior civil service is the top tier of managers, executives and policy-makers within the civil service — essentially a 'permanent government' or de facto Board of Directors composed of career civil servants.

These most senior grades have been subject to intense scrutiny from anti-discrimination campaigners for decades because of the pivotal structural influence they exert on the entire civil service and on wider societal development.

Out of 51 appointments through open competition to the senior civil service during the past three years, only four Catholic women have been successful. That's a mere 7.8%.

These damning statistics came to light last month, when the Civil Service Commissioners — who must approve all appointments to the senior civil service — published their annual report. The document showed that out of 51 appointments in the last three years, just 13 were Catholics and only 12 were women.

Although the report did not provide any tabulated formula for analysing a cross-section of recruits, such as the representation of Catholic women or Protestant men, it has now been established that just four Catholic women have been appointed to the senior civil service in the past three financial years and only three Catholic men were appointed in the last year.

Catholics and women have long suffered discrimination in the job market and for decades they have also been grossly under-represented within the senior civil service. Earlier this year it was revealed that under current patterns of recruitment it would take until the year 2057 before Catholic representation in the senior civil service is equivalent to the current proportion of Catholics in northern society.

Sinn Féin says the revelations "send out a serious message on the need for change".

The party's spokesperson on Women and Anti-Poverty, North Belfast MLA Kathy Stanton, says that the figures are evidence of the considerable barriers that still remain within the civil service that block the advancement of both Catholics and women — and particularly candidates who are both.

"Obviously, a mechanism needs to be put in place that will allow more transparency and accountability with respect to recruitment," says Stanton. "We need to address the question of why more Catholic women are not in the senior civil service.

"Catholic women in the north continue to endure both the gender gap and religious discrimination when it comes to seeking employment or career advancement.

"There has been a review of the appointment of senior civil servants and we now need to see clear evidence that this will effectively address the situation. This requires a major change in ethos within the civil service and in the appointment process."