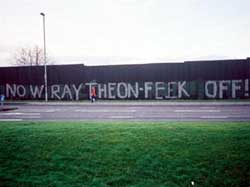 The city of Derry is to feature in a high-profile "war crimes" case against American-owned Raytheon Corp, which operates a software development centre in the city.

Raytheon, one of the world's largest arms dealers, is known internationally for manufacturing lethal weapons, including the Tomahawk and Patriot missile systems.

This past week a top US anti-arms organisation announced plans to file criminal and civil war crimes charges against Raytheon, relating to the use of Raytheon-made weapons in the war on Iraq.

The Massachusetts Anti-Corporate Clearinghouse (MACC) intends to invite representatives of the Derry-based Foyle Ethical Investment Campaign (FEIC) to provide evidence at the planned hearings, which should begin in Massachusetts in September of this year. FEIC campaigners have been instrumental in opposing the placement of the Raytheon plant in Derry since the corporation first applied to locate a centre there.

"We are working with an attorney to file both criminal and civil claims against Raytheon for war crimes," writes MACC spokesperson Seán Donahue in a letter to the FEIC, "and we are working to organise a public tribunal to hear evidence on Raytheon's crimes.

"The tribunal will be held somewhere in the Boston area next September. We hope that we can find a way to incorporate your experiences in Derry into the body of evidence."

Raytheon, adds Donahue, has no "legitimate role to play in bringing peace and prosperity to Derry."

Although Derry City Council recently held a special meeting in the Guildhall to discuss Raytheon's presence in the city, representatives of the arms giant "declined" the invitation to attend and the meeting went on in their absence.

Protesters held a vigil outside as FEIC member and human rights activist Angela Hegarty told the Council the organisation's vision was to create an economic policy for Derry, which made it a "magnet" for socially responsible investment.

"We believe that, by rejecting the arms trade, Derry City Council creates the environment whereby the city can become the natural centre of the peace industry rather than an outpost of the war industry," said Hegarty.

Speaking of Raytheon's work in Derry, she added, "The software being developed in Derry helps Raytheon design weapons more effectively. The software is the bomb. Without software, missiles are useless."

The meeting concluded with City Councillors passing a precedent-setting motion which would reject offers by other arms manufacturers to set up factories in Derry. A majority of councillors backed the joint compromise, put forward by Sinn Féin and the SDLP.

The motion, inspired by a call from the FEIC, commits the City Council to a policy of socially responsible job creation and means that in future, the Council will oppose participation in the international arms trade.

Anti-arms campaigners have praised the "moral leadership" shown by the Council and welcomed their decision. They say they hope it will now be mirrored by other councils in Ireland, Britain and other parts of the world.

"We are delighted with the motion," says Peter Doran, of FEIC. "It is as much as we could have hoped for and is probably unprecedented for a city to formally reject the arms trade as a source of job creation.

"It is also highly significant that the council is moving in the direction of ethical investment. I think it sends a powerful message about the integrity of the peace process in the north and about Derry in terms of its history and as a city committed to human rights."

Sinn Féin's Gerry Mac Lochlainn says that pouring money into the "black hole" of the arms trade is "immoral, counter-productive and wasteful.

"By sustaining inequality and injustice in this world, the causes of conflict grow unchecked and the world becomes even more dangerous. On the other hand, spending on real ethical and sustainable growth can lay the basis for a secure and lasting peace for our global community."

The Sinn Féin representative called on Raytheon to be clear and unambiguous about its role in Derry.

Raytheon meanwhile, has repeatedly insisted that exclusively civilian work is carried out at the plant, in the are of "software development for civilian air-traffic control".