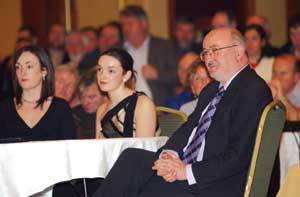 Caoimhghín Ó Caoláin listens on with daughters Sinéad and Cliodhna

A packed Hillgrove Hotel in Monaghan town heard last Friday night how Caoimhghín Ó Caoláin helped spearhead the Sinn Féin electoral strategy. At a function organised by local republicans in recognition of the role played by Caoimhghín as a member of Monaghan County Council for over 18 years, Gerry Adams said that the Sinn Féin Dáil leader had given excellent service as a public representative and that he will continue to do so for many years to come.

Caoimhghín Ó Caoláin had to resign his position on the local authority as a result of the recent abolition of the dual mandate. The local cathaoirleach of Monaghan Town Council, Seán Conlon, acted as MC for the evening. He was joined by long-serving Councillors Brian McKenna (Monaghan County Council) and Pádraigín Uí Mhurchadha (Monaghan Town Council) in paying tribute to the role Caoimhghín played on both those authorities.

Hard work and attention to detail

Cllr Brian McKenna said it was Caoimhghín's hard work and attention to detail that had the Sinn Féin party in Cavan-Monaghan where it is today.

Cllr Uí Mhurchadha said that Caoimhghín had given sterling service on Monaghan County Council since 1985. He was instrumental in encouraging more republican women to enter politics and she was proud to be one of them.

"The most eloquent statement I can make is the fact that I am here tonight," said Sinn Féin President Gerry Adams. He recalled his first meeting with Caoimhghín in 1981: "It was an experience for me," he said, "to meet a guy, who was single and in a good job who was prepared to come and work for us for nothing when it was socially unacceptable to be an Irish republican in this State".

Gerry Adams paid tribute to Ó Caoláin's work in the Dáil, stating that it was a hostile place, "a cold house" for Irish republicans to stand up and try to explain to an audience outside the chamber what the republican position is. Adams commended Caoimhghín and his family and offered his best wishes for the future.

In a wideranging address, Ó Caoláin said it was a very special occasion for himself and his family to be in a room of people committed to the achievement of something that generations of Irish men and women had struggled to achieve. They could all be very proud of the legacy they had inherited and they had to recognise the responsibility that came with it, he said.

He paid tribute to those who had given elected representative service to the party since 1985, each of whom had given selflessly of their time and talents to the people of Monaghan and to the republican struggle.

"This night is not about acknowledging or honouring any single individual's contribution," he remarked. "It is about recognising a team and many of those team players are here in this room."

Sinn Féin is strong because it has a good team spirit in Cavan-Monaghan and this will ensure it will continue to play an important role as the struggle moves forward to achieving a united and free Ireland, he pledged. "Sinn Féin is not about careers in politics or self service, it is about service and dedication to a common cause and we will ultimately win through."

Ó Caoláin introduced the party's candidate for the new Northwest constituency, Pearse Doherty from Donegal, stating that never before had he felt so confident that they were in with a real fighting chance of taking a European seat in the region.

Caoimhghín recalled that in 1985, Sinn Féin had only two council seats in County Monaghan. Today, the party has 17 elected representatives in Monaghan and six in County Cavan. He paid tribute to all those who served the party in the role of councillor.

He said it was always a great privilege to be joined by Gerry Adams and he thanked everyone who had worked so hard to put the evening together.

Presentations were made on the night on behalf of the party to Deputy Ó Caoláin, his wife Briege and his mother Gene by Councillors Sheila McKenna, Brenda McAnespie and Padraigín Uí Mhurchadha.