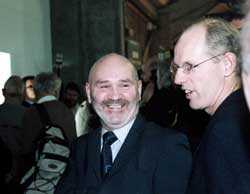 There can be no arguing about the gains made by Sinn Féin in this election. The party achieved a record vote share of 23.5% and 162,758 first preferences. The six new seats were won in North Antrim, North and South Belfast, East Derry, South Down and Newry/Armagh.

The highest overall increase in vote share was the 13.83% rise in first preferences recorded by the party in Newry/Armagh. The biggest constituency turnaround was the near doubling of the party vote in South Belfast and the party made gains in 17 constituencies (there was no Sinn Féin candidate in North Down in 1998). The SDLP made losses in 15 of the 18 constituencies.

Sinn Féin also set one more electoral record with seven women elected out of the 24 MLAs. Percentage-wise the Alliance's two out of six female MLAs is higher, but Sinn Féin had more women in winnable Assembly seats than any other party (even though there is still clearly much work to be done!)

The SDLP were the biggest losers in this constituency, with Danny O'Connor losing his seat. The SDLP vote share was up but six unionist seats were returned, with three for the DUP, up two on 1998. Sammy Wilson and George Dawson join David Hilditch in the Assembly. The DUP vote share was up nearly 12% on 1998, benefiting from a collapse in the UKU vote.

This count was a cliffhanger, with the DUP's Hilditch and Dawson, the UUP's Ken Robinson and the Alliance's Seán Neeson all getting elected on the 15th and last count, leaving the SDLP hanging 800 votes off a seat.

This had to be a case of you're not singing anymore, as Ian Paisley's normal post count hymn was forgotten in his lapel pulling rants. Maybe his silence had something to do with Sinn Féin's Phillip McGuigan winning not just 14.05% of first preferences but also a first Assembly seat for the party in the DUP heartlands.

The elimination of the SDLP's Donovan McClelland brought in 467 transfers for Meehan. However, the bulk of McClelland's vote went to fellow SDLP candidate Thomas Burns, who along with Alliance leader David Ford was elected without reaching the quota.

The other four seats were shared between the DUP and the UUP. The DUP only picked up one seat here in 1998, the other going to the UKU. This time around, the UUP vote was unchanged at 29.81%, while the DUP vote jumped 10.48% to 30.6%, mopping up the UKU vote. The see-saw struggle between the UUP and DUP will continue until the next Westminster election, with Burnside's seat under threat.

The Sinn Féin vote in Upper Bann jumped 7.51% to 21.83% and it looked like the party could mount a serious challenge for a second seat here. The end result was an eleven-count election, with sitting Sinn Féin MLA Dara O'Hagan losing out at the last count to party colleague Councillor John O'Dowd.

David Trimble topped the poll, even though the UUP vote share was almost unchanged on 1998 at 29.41%, while the DUP jumped 13.02% to 28.52%. Independent and UK unionists had taken over 13% of first preferences in 1998 and this explains much of the DUP gains. The DUP and UUP had two seats each. The independent unionist Denis Watson ran for the DUP this time. It seems they got the votes and he lost his seat!

In terms of seats held, it was the same as you were in 1998, with two seats each for the DUP and UUP, while the Alliance and PUP took one each.

This was another breakthrough for Sinn Féin as the party took two seats in this key constituency, as did the DUP. Last time around, the six seats were shared between different parties.

So who were the losers? The PUP's Billy Hutchinson lost his seat as the party vote fell from 9.12% to 4.31%. Independent Unionist Fraser Agnew also lost his seat to the DUP, who mopped up independent unionists across constituencies.

For weeks, Sinn Féin activists have been talking up this constituency as a new seat for the party. On paper, the magnitude of the task was daunting. Alex Maskey would have to double the party vote. Last week, it was just this result that was delivered. The Sinn Féin vote rose from 6.4% in 1998 to 12.55% this time around.

The quota was 4,447 votes, with Maskey winning 3,933 first preferences and a seat on the last count.

The SDLP vote increased marginally, up 1.2% to 22.9% electing Carmel Hanna and Alasdair McDonnell once again.

The losers were the PUP and Alliance, while the Women's Coalition representative Monica McWilliams also lost her seat here.

One of the more ambitious Sinn Fein targets in this election was the strategy to take five seats in West Belfast. In 1998, the party took four seats with 58.98%. A 6.06% increase in vote share was not enough to bring the fifth seat, however, and Sinn Féin again returned four members here. One of the previous four, Sue Ramsey, was pipped for the last seat by the DUP's Diane Dodds by 87 votes.

Ramsey's party colleague, Michael Ferguson, took the fourth seat just 259 votes ahead of Ramsey. One wonders who were the 112 voters who, having given Joe Hendron a first preference, transferred to the DUP's Dodds and deprived republicans of that fifth seat.

The SDLP lost a seat as their vote fell 5.91% to 19.02% and Alex Attwood was elected. The DUP vote increased 4.52% to 7.74%, leaving them on 2,544 first preferences, but massive transfers from the UUP and PUP lifted their vote significantly with, in the end of the day, a little help from the SDLP.

This was another of the six breakthrough constituencies for Sinn Féin, with Francie Brolly winning a seat. Sinn Féin's vote grew by 8.09% to 17.86%, split between Brolly and running mate Cliona O'Kane. O'Kane was eliminated on the sixth count and her transfers elected Brolly.

In 1998, the other four seats were split, with two for the UUP and one for the DUP and independent unionist Boyd Douglas. Soon after the election, the UUP's Pauline Armitage joined the UKU. Armitage lost her seat this time around, as did Douglas, leaving the DUP and UUP with two seats each, The DUP vote was up 8.79% to 32.36%, while the UUP registered a 2.54% drop.

A massive 16.61% swing brought an extra DUP seat here as the party elected Peter Weir and Alex Easton. Weir had been on the UUP ticket in 1998 but jumped to the DUP.

The UUP vote in the constituency was almost unchanged at 32.06% and they also won two seats. It was the UKU vote that suffered, down 10.79% on 1998, but party leader Robert McCartney held his seat as did Alliance's Eileen Bell, even though her party's vote was down 5.78% on 1998. The main loser was Jane Morrice of the Women's Coalition, who lost her seat.

Maria George was the Sinn Féin candidate in this most difficult constituency, polling 264 votes, just under 1% of first preferences.

It was in this constituency that Sinn Féin registered its second largest percentage vote gain and won seats for Caitríona Ruane and Willie Clarke. The party won 26.48% of the poll, up 11.35% on 1998.

The SDLP vote was down 10.18%, caused in part possibly by the retirement of Eddie McGrady and held only two of the three seats won in 1998.

A 7.58% increase in vote share in this constituency to 34.45% was not enough to elect three Assembly members for Sinn Féin and, while Michelle Gildernew topped the poll, Gerry McHugh lost his seat to party colleague Tom O'Reilly.

The SDLP vote fell 5.3% to 16.26% of first preferences leaving the party's sitting MLA Tommy Gallagher in a battle with Gerry McHugh for the last seat in the constituency. After the eighth count, McHugh was 262 votes behind Gallagher, who was elected without reaching the quota.

The SDLP suffered hugely here from the loss of John Hume and the party's vote share slumped to 36.14%, down 11.7% on 1998. The Sinn Féin vote was up 6.36% to 32.38% and the party again elected two, Mitchel McLaughlin and Mary Nelis. After the ninth count, Nelis was only eight votes ahead of fellow Sinn Féin candidate Raymond McCartney. The SDLP held the three seats won in 1998 but the Westminster seat must now be in doubt, with the Sinn Féin vote still growing.

William Hay held his seat for the DUP, winning 14.95% of first preferences, up 2.42% on 1998, while the UUP vote was down 1.43% to 8.14%. One of the surprises of the election was the 5.53% of votes won by Eamonn McCann, running as a socialist environmentalist. McCann's preferences were spread fairly evenly between the SDLP and Sinn Féin.

After the first count, Butler had 3,242 first preferences, with Lewsley on 3,133. Butler won very few preferences after the first count, however. Lewsley got more transfers, including 79 votes from the surplus of the DUP's Edwin Poots, 91 votes from Independent Ivan Davis, 39 from the UUP's Billy Bell and 154 from Alliance's Séamus Close. When Butler was eliminated, 2,721 Sinn Féin votes transferred to Lewsley.

A 13.83% increase in first preferences gave Sinn Féin 39.79% of the vote here and three out of six seats for Conor Murphy, Davy Hyland and Pat O'Rawe. This was the largest first preference gain for Sinn Féin across the 18 constituencies.

The SDLP vote was down 10.45% to 24.56% and the party lost one of their two seats. In a change of personnel, John Fee was outpolled by Dominic Bradley.

John Taylor set an electoral record here as he was re-elected. Taylor was a member of the original Stormont Assembly and is the only sitting MLA who has an electoral track record of similar longevity. Paisley comes close.

The Sinn Féin vote grew here by 4.52% to 38.61% and the party held the two seats won in 1998, holding on until the last count in a battle for the final seat. The SDLP vote was down 11.07% on 1998, with the surprise of the election being Kieran Deeny, an independent hospital candidate who was elected on the first count with 14.7% of first preferences.