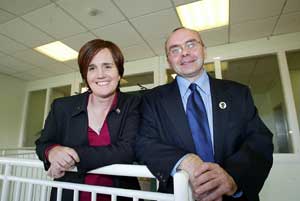 This election result is a far cry from the days when the state was set up where no Catholic need apply, says Sinn Féin's JIM GIBNEY.

Elections are great craic, or they can be, depending on how you handle them. Provided you're not a candidate, they are exciting, exhausting, exhilarating and when the result doesn't go your way, exacerbating.

If you are a candidate, they can be all of the above but the primary emotion is frayed nerves, sitting metaphorically on the edge of your seat from the start of the campaign, when you tentatively knock the first door, until you see the first ballot paper falling out of a box at the count some three weeks later.

Election campaigns test political activists to the outer limits of their physical, emotional and intellectual endurance.

They stretch the capacity of the organisation like an elastic band, while at the same time demanding a marshalling of human resources as a general would his troops on a battlefield.

A Director of Elections needs a sixth instinct for constantly 'fine-tuning' human and financial resources. 'Maximum impact for minimum input' is a good rule of thumb to avoid peaking too soon or too late.

An eye for detail and an ear for anxiety from any quarter of the campaign team, particularly the candidate, are also indispensable qualities.

Polling Day and Count Day are days like no other. A cool head is required to ensure last minute nerves don't turn best-laid plans upside down.

Adrenaline pumping through the veins can instil strange powers of perception for even the most logical and normally calm thinkers. Voter blindness on polling day can lead to over or underestimation of turnout.

For some strange reason, some people standing outside a polling station can't see voters walk past them on their way to vote. They either see a trickle or droves.

All around there appears chaos but the 'Tally Hut' properly run should emerge as an oasis of certainty by 10pm, close of poll.

Managing the count is like holding mercury on a spoon. Counters need tunnel vision to see only their candidate's name and the voter's preference marked beside the name.

They need the instinct of a bloodhound tracking an escaped prisoner to track the voter's preference from count one to possibly count 13.

I knew none of the above in my first election campaign in 1981, when Bobby Sands stood in Fermanagh/South Tyrone. Then the campaign and the issue was straightforward: a vote for Bobby would save his life and win political status for the prisoners.

My main memory of that campaign was sweeping through the constituency in a huge single decker bus, painted pink, dubbed the 'pink panther' by a Daily Telegraph journalist with an Irish surname who accompanied us throughout the campaign.

We disembarked at every town and village with names that were ancient but sounded odd to my Belfast ears and ignorance, like Augher, Clogher and Fivemiletown.

We were 20-plus years younger than today, with a spring in our heels borne out of that relative youth and spurred on by the mission to save the lives of Bobby and his comrades.

We hadn't a clue how to fight elections. We didn't know what a register was, never mind a marked register. Some of us were from Belfast and that said it all.

But there were those who knew - those who fought elections West of the Bann as far back as Tom Mitchell, a republican prisoner elected in the '50s. They directed our enthusiasm.

We were in the first flush of election fever. We distributed leaflets by the thousands, postered everything and anything big enough to hold Bobby's smiling face. Time was of the essence. We ran everywhere up and down country laneways to knock doors.

People told us they had never been canvassed in their lives before. We left them a flyer and flew on. Boundless energy on the march.

I remember discovering while canvassing, with more than a degree of alarm, that UDR men and former 'B' Specials were living cheek by jowl with republicans in these small hamlets and villages and that it wasn't unusual for members of the crown forces who were farmers to borrow farm implements from their neighbours who were republicans and vice versa.

I was at the convention that selected Owen Carron to run when Bobby died, where Bernadette Mc Aliskey from a packed audience asked, with more than an edge of frustration in her voice, and this was 1981, whether republicans would ever represent the people who voted for them in any parliament on these two islands. A strange question, we all thought.

I sat alongside Gerry Adams at about 4am in the morning in Belfast's City Hall in 1992, watching the SDLP's Joe Hendron's bundle of votes inch past Gerry's as he took the West Belfast seat. 'Was it really going to be a big setback?' I asked naïvely of a stoical Gerry Adams, who managed a wry smile in my direction.

At 9am that morning, I joined Tom Hartley in one of the biggest car cavalcades I have ever been on touring West Belfast. Gerry Adams was thanking the people for their solidarity and vote.

It was an emotional tour which I had to leave post haste when I broke down seeing the women of Springhill surround Gerry's taxi with flowers, cards and champagne. He lost the seat but not the people's hearts.

That was a long time ago, and republicans have developed an election machine the envy of all other political parties on this island, which has produced dramatic election results North and South, one after the other, since the IRA's first cessation in 1994, the latest result being the most spectacular to date.

I can hardly believe I am writing this. Sinn Féin is now poised to appoint a person who will be joint Prime Minister of the North!

It is a far cry from the days when the state was set up where no Catholic need apply.

I was in Lagan Valley trying to get Paul Butler elected. It was a great campaign. In a remarkable result, he outpolled the SDLP candidate and is well placed to take the seat next time.

We operated what was described as the 'Martin McGuinness school of canvassing.' Martin personally knocked practically every door to take the Mid-Ulster seat the first time. Where it was safe to do so, Paul did the same.

But as I watched the papers tumble from the ballot boxes onto the table, I thought of some of the people we canvassed who had voted for Sinn Féin:

• the 60-year-old woman who as a 16-year-old trainee secretary was told by her tutor that the numerous requests for secretaries from employers didn't involve her and her friends because they were Catholics.

• the cluster of houses, dubbed Lagan Valley's West Belfast by us, where we got a minimum of one vote out of each house, where people told us there were no Catholic businesses left in the village.

• the people, one after the other, who complained that they couldn't get planning permission for their children to build houses on their land, whereas those from a unionist background could. Their children had to move and the land was overgrown with weeds.

• the woman who was refused permission to build an extension onto her husband's family home to accommodate her husband's siblings who were ill.

Elections bring the best out in people and republicans all over Ireland rallied to the North.

In Lagan Valley terms, the accolade has to go to Paul's postering team. They put an operation together that had them out at 3am in the morning putting up posters late at night. They put posters up in loyalist strongholds in areas where it was life threatening to be so bold.

Loyalists initially countered and put a team together to take the posters down as they went up. But the loyalists were overwhelmed and Paul's posters prevailed.

There was a casualty along the way. One of the team fell off a ladder and smashed his ankle. He's in hospital in traction. Our thoughts are with him.

Elections are about many things but at their core they are about people and their aspirations, immediate and longer term. The task now is to fulfil as many of those aspirations as we can.