Gerry Adams - We are determined to see the Agreement implemented 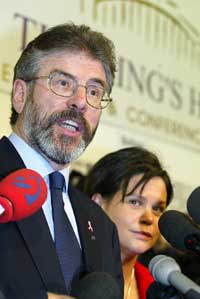 Sinn Féin President Gerry Adams, speaking in Parliament Buildings on Monday to the new Sinn Féin Assembly team, said: "Sinn Féin is determined to see the Agreement implemented, and a new dispensation of peace and justice on this island. There can be no renegotiation of the Good Friday Agreement."

He said: "The DUP can refuse to participate if they wish in the political institutions, that is for them to decide, but they cannot veto the other elements of the Agreement. It is therefore up to Mr Blair, along with the Taoiseach, to proceed with their commitments on policing, the criminal justice system, demilitarisation, the equality agenda, human rights, the Irish language and other matters, including OTRs."

"I want to commend all our election workers and to thank all those who voted for us. Last week, 24 Sinn Féin MLAs were elected, confirming our position as the largest nationalist party in the Six Counties and the third largest party on the island. We are very conscious of the responsibility that this puts on us and that is why we have brought our new Assembly team together so quickly and our Ard Chomhairle will be meeting later in the week. I have asked Conor Murphy to take up responsibility as leader of our group. We will look to him and others to recommend portfolios in the days ahead.

I am pleased that so many MLAs have been returned and I am mindful that we narrowly failed to win almost half a dozen other seats by handfuls of votes.

We will be making representations about the conduct of the election in the time ahead. Many citizens were denied their right to a vote. This arose from a campaign by all the other parties to put restrictions on voters rights and I hope that those involved now see the error of their ways. More importantly I hope the voters hold them to account. In the meantime it is of crucial importance that we continue with our registration drive and that those voters who were refused their photographic ID get these as soon as possible.

It is a great honour to represent Sinn Féin and a humbling and proud experience to be elected by your peers. So all of us will endeavour to use our mandates wisely.

Sinn Féin asked the electorate to endorse our peace strategy - and they did that.

We asked them to share our vision of an Ireland united and independent - and they did that also.

And we asked them to strengthen our hand, not only in negotiations but also in defending public services and in working any new administration. And they did that as well.

The election results were a significant achievement for Sinn Féin. We are now poised to take the Deputy First Minister's position. This is a far cry from the days when republicans and nationalists were second-class citizens in our own country - when a Fenian could not be seen about this place. We are pleased to be here as unrepentant Fenians and I dedicate our achievement to the memory of Bobby Sands and the other Hunger Strikers and the sacrifice of other Sinn Féin leaders like the late Maura Drumm and Sheena Campbell.

Where now for the Peace Process?

We are also determined to see the Agreement implemented, and a new dispensation of peace and justice on this island. There can be no renegotiation of the Good Friday Agreement. That is our position and we make no bones about it. The principles, structures and obligations of that Agreement cannot and will not be subverted.

On Saturday, Alex Maskey and I met with the British Secretary of State, Paul Murphy. We asked him to lift the suspension on the institutions. And we told him that there was a need for acts of completion of those elements of the Good Friday Agreement which are the responsibility of the British Government. I was also in conversation with the Taoiseach's department and I made the same point.

Last Wednesday, almost half a million people voted for pro-Agreement parties and the majority of MLAs returned are pro-Agreement. We also had the DUP successfully returned as the largest Unionist Party. This has caused some to be pessimistic about the re-establishment of the political institutions and the implementation of the Agreement.

There are also those who are attempting to present the current situation as a standoff between Sinn Féin and the DUP. It is not.

Sinn Féin recognises and respects the mandates of all the other parties. We have our own analysis and policies but this does not prevent us from listening and engaging with our opponents. On the contrary, unlike the DUP we are not afraid of dialogue. We are very much in favour of it. That is why our party has sought meetings with all the other parties and with the Taoiseach and the British Prime Minister.

The increase in support for the DUP results directly from its ability to mop up all of the anti-Agreement smaller parties within the old Assembly. Pro-Agreement unionism did not switch to the DUP but a section of it sat at home last Wednesday.

Despite this, there is also the reality that 70% of the electorate voted for the Agreement.

So, in the immediate time ahead, dialogue between Sinn Féin and the UUP is critical. We need to build a pro-Agreement project that will either compel the DUP into the institutions or, if they refuse, will leave them behind.

So the rise of the DUP is a greater challenge at this time for the British Government than it is for Sinn Féin. And republicans need no pontificating from British Ministers about our responsibilities.

London has a choice to make

The DUP can refuse to participate if they wish in the political institutions, that is for them to decide, but they cannot veto the other elements of the Agreement. It is, therefore, up to Mr Blair, along with the Taoiseach, to proceed with their commitments on policing, the criminal justice system, demilitarisation, the equality agenda, human rights, the Irish language and other matters, including OTRs.

Sinn Féin will engage in good faith with the governments and the other parties and we look to everyone to play a positive leadership role.

I believe that we can find a way through the present difficulties but I am not naive, I am a realist.

This party is not dependent upon 'rejectionist unionism' to allow us to fulfil our mandate. All Sinn Féin MLAs will promote our vision of a united Ireland. We also have a responsibility to make representation on social, economic and other issues affecting our constituents. Public services need to be defended and Sinn Féin has an agenda for government that needs to be promoted.

That agenda will be the measure by which we will judge the work of British direct rule ministers who are here with no mandate whatsoever.

We have a responsibility and an obligation to be a radical voice. And whether it is on health, housing, the environment, water charges, education or the economy, the Sinn Féin voice will be heard - and not just in this part of Ireland.

Because we are an all-Ireland party, the recent election was a national effort by us. Party members from across the island, particularly our TDs and councillors, were active on the ground. So too were our opponents in the southern political establishment.

Fianna Fáil, Fine Gael, Labour, and the Progressive Democrats have a number of things in common but the one big issue uniting them is their fear of the growing support for Sinn Féin. This is because our party is seen increasingly as an alternative to the politics of corruption and conservatism.

Later this week, the Minister for Finance, Charlie McCreevy, will be publishing his Budget. Sinn Féin has already made it clear that we need a budget that will bring Irish social spending from the lowest in Europe to at least the European Union average. Sinn Féin's proposals are about the achievement of equality, environmental protection, the elimination of poverty and the development of public services. None of us can have any doubt that the Finance Minister will protect the wealthy and reward corporate greed.

So, in both parts of this island there is a lot of work to be done, whether in the immediate term in facing up to the challenges here in the North, developing relationships with others of a like mind in the South, and all the time building our political strength so as to maximise the possibilities of change right across the island.

I have no doubt that the Sinn Féin Assembly team will play a key role in all of this in the time ahead. And I wish all our MLAs and your families' good luck and best wishes. May I also on your behalf extend best wishes to the representatives of all the other parties."