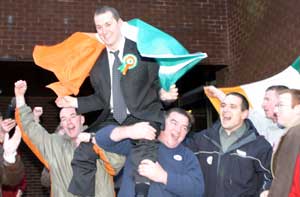 An ecstatic Philip McGuigan is carried shoulder high from the count centre in Ballymoney last week, having taken a first ever seat for Sinn Féin in North Antrim, the heartland of Paisleyism.

His election, and the tremendous success for Sinn Féin across the Six Counties, is evidence of a sea change in the North over the past decade. There are no more second-class citizens. Republican voters and their elected representatives are confident and moving forward together. Their message is that there can be no veto on the changes promised in the Good Friday Agreement.