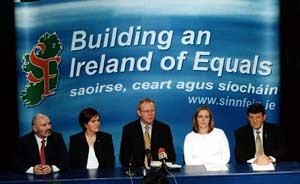 An Phoblacht: What does Sinn Féin see as being particularly significant about this election?

Martin McGuinness: I believe the story of this election will be the return of Sinn Féin to the Assembly as the largest nationalist party. The Pro-Agreement electorate recognises rightly that Sinn Féin are the most effective negotiators and for that reason people will want to see Sinn Féin empowered to secure the position of First or Deputy First Minister. I believe this will happen in this election."

How does Sinn Féin evaluate its appeal to the electorate?

We have delivered significant change and I think the electorate will welcome the opportunity to reward Sinn Féin for the work we have done and also to empower us to continue that progress of change through the peace process and the Good Friday Agreement. I think the electorate knows that republicans have taken great risks for peace and we are asking people to endorse that and by voting for Sinn Féin, to keep the momentum going.

Sinn Féin is on the verge of an historic advance and that will be seen across the North, in Belfast, North and South, Antrim, East Derry, Upper Bann and Lagan Valley, as well as within republican heartlands such as West of the Bann and Newry and Armagh. But we can't take anything for granted. That's why I am appealing to people to come out and vote in this election. Their vote is needed and a vote for Sinn Féin is a vote for change. It is a vote for peace and a vote for the full implementation of the People's Agreement.

Anti-Agreement unionists want to scrap the Good Friday Agreement cts the work that Sinn Féin has done and the party's wider community appeal. This wider appeal will effectively put us in as the largest nationalist party. We will achieve this on the basis of the electorate reflecting upon Sinn Féin's record, assessing our negotiating skills and our ability to manage a process of change that is, at times, difficult for everyone.

In what way can this election be seen as an opportunity?

This is a very good opportunity for the electorate to continue the project of change by voting for the party of change, the party of equality and the party that has been the heartbeat of this process of change from the very beginning. The political landscape of the North has been changed, and changed forever as a result of recent elections. That process of change will continue and possibly in a very dramatic way in the course of these elections.

How will Sinn Féin use the mandate it gains in this election?

I think there is a real understanding within the community that any mandate Sinn Féin is given in the course of this election will be used totally and absolutely in the interests of peace, in the interests of the peace process and the implementation of the Good Friday Agreement.

Traditionally, Sinn Féin has done well in attracting First Preference votes but less well in securing transfers. Are transfers likely to play a more significant role in this election?

The recent by-election in County Down was, I think, an absolutely first class example of how the Pro-Agreement electorate are transferring to Sinn Féin candidates. I think we will see further evidence of that in the course of this election. So the answer is Yes, attitudes are changing in that regard and more and more people from more and more political backgrounds are finding it much easier to transfer to Sinn Féin candidates.

Will Sinn Féin outpoll the SDLP?

We can say with confidence that Sinn Féin is going to be ahead of the SDLP. It's hard to predict by how many seats because of the many variables we have spoken about, for example the issue of transfers, but many independent analysts agree that Sinn Féin is going to increase its representation. They know by examining constituencies, there are quite a number of areas where it is possible, even probable, that extra Sinn Féin MLAs will be returned. We're confident that this election will lead to a further transformation in the political landscape of the North.

What is the key issue facing the electorate?

I think there is a real understanding within the electorate that the issue is one of supporting the Good Friday Agreement. In this sense, Pro-Agreement voters are people with a mission. There are people out there who are dead set against the Agreement and determined to destroy the new political landscape that is transforming relationships throughout the island of Ireland, but they are swimming against the tide. Pro-Agreement voters need to be very focused. We are the majority and we should be using that majority to secure the peace process and bring about further change.

Will the DUP emerge strong enough to threaten the peace process?

In my view, the DUP is not going to come up tops. The DUP may pick up the Anti-Agreement votes of the smaller parties but I don't think they will be able to significantly erode the Pro-Agreement vote. I am confident that after the election, the Pro-Agreement parties will be in a position to push the process forward. Whatever the outcome of the election, none of us are going to walk away from the process and there will be a real effort to ensure that the political institutions agreed in the Good Friday Agreement will be restored, both the power sharing arrangements of the North and the All-Ireland institutions.

Sinn Féin is a party on the move. There's more work to be done.

There are more people to be persuaded to support us.

We're confident, in good form and working well as a team.